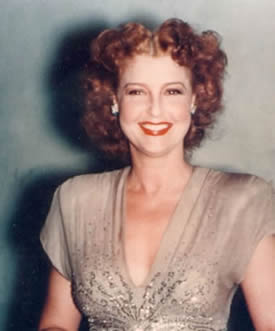 I am 92 yrs old.  Saw Jeanette in person  at concert in Pittsburgh in 1944.  She was so beautiful and sweet and she mentioned that her husband had just been promoted to Major.  At the time we thought she was happily married to Gene Raymond and since reading your books we realize she was actually with the man we hoped she was in love with.

My friends had adored Jeanette from our first glimpse of her and I had purchased all her records old 78s and Mother and I went to all her movies.  For the concert in 1944 it was wartime and we all had to pool all our gas stamps since it was approximately 40 miles from our home in Latrobe PA.  The concert was unbelievable and we couldnt believe we were actually seeing our idol in person.  She was more beautiful in person and her sweetness shone through her songs.  Her singing was so lovely and we were all saddened when the concert was over.  After reading your books [ and they were so well written and revealing] that I almost wish I had not read them because I had always thought she had a fairy tale life which she richly deserved and to find that it was completely opposite saddened me.  For Gene I have the utmost contempt but even Nelson though no doubt loved her with utter passion had many liaisons which hurt her deeply.  To think Gene put his hand on her in anger!  Why didn’t anybody realize she had a serious problem with her heart and get her help much sooner.  How she performed and made movies with a weakened heart just blows my mind.  Thank you again for the books as I read them constantly and play her music in my car and at home. I know she is being treated like the star she is in heaven and she is high on my list to see after my family.

PS Thank you for responding to my Email.  I just needed you to know how much her fans love her forever.

Dear Marion, thank you for the wonderful email. In answer to your question regarding Jeanette’s health: they did not have the medical technology to handle her heart in earlier years.  The nurse that I interviewed who tended to Jeanette in Washington, D.C. in 1957 said they did do some sort of surgery but found they could not help . She was the one who said that Gene was there at first and then left.  In theory, the arterial transplant done by Michael DeBakey in 1963 should have given Jeanette a longer life but she was already quite weakened by then and spent almost 3 months in the hospital. It is my belief that if Nelson had remained at her side she might have been able to regain her strength and bounce back (to some degree) yet again but it was not to be. – Sharon