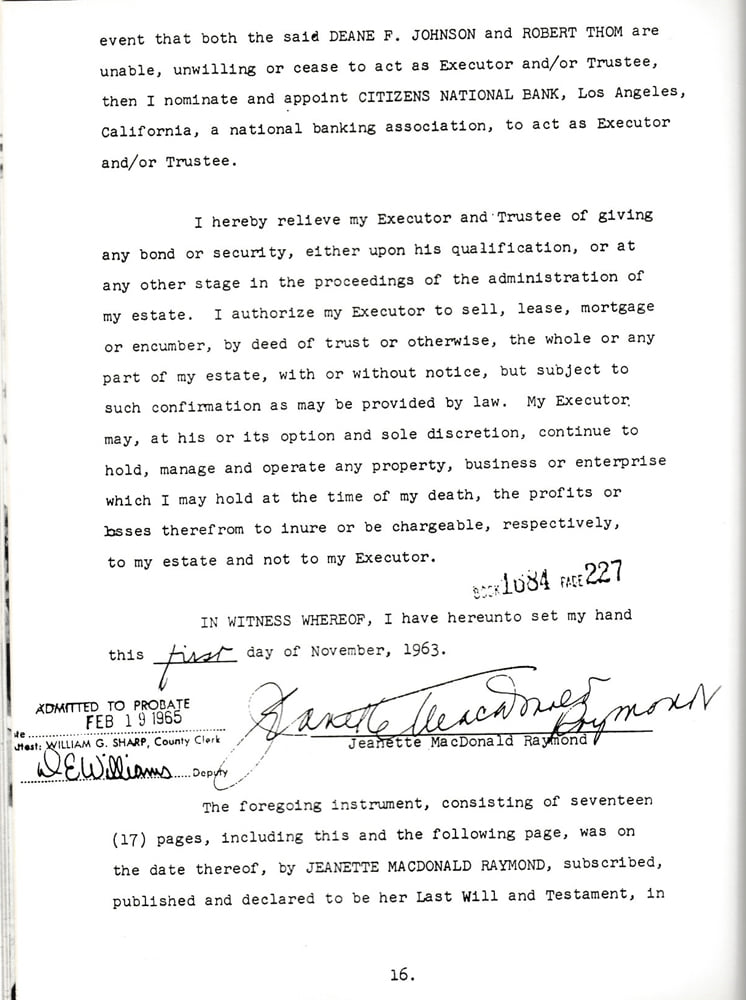 The page above from Mac/Eddy Today, Issue #74 is an excerpt from an article showing Jeanette MacDonald’s 1948 handwritten desk diary, in which Jeanette notes that on September 5th, she and her husband Gene Raymond hosted a party at their home for singer Eleanor Steber. Nelson Eddy and his wife Ann also attended. It was all very civil. But the very next day, September 6th, Jeanette notes her trip to Lake Tahoe. At least once each year in the fall, she and Nelson went to Tahoe to renew their wedding vows made privately in 1935 while filming “Rose Marie.” If and when Jeanette ever announced publicly that she was off to Tahoe with “my husband,” she considered she was telling the truth. The Rise Steven article in the same magazine provides new details surrounding Jeanette and Nelson’s 1945 trip to Lake Tahoe. (The article is copyright 2017; all rights reserved.)

Nelson censored 1960 letter: “Give her my continuous love & sincerity” Nelson’s writing about Jeanette: “give her my continuous love & sincerity” was not to be tolerated in one of the Jeanette fan clubs.

The fear of anyone taking Nelson’s word LOVE literally meant it had to be deleted from his letter! And quoted in their fan club magazine with a hanging sentence.

Hence the whiteout. On page 2 of an original, 1960 handwritten letter by Nelson Eddy.

Even though Jeanette herself published the letter elsewhere with that “offensive” word intact, Jeanette’s “official” biographer chose to quote that letter in his book but also with the word LOVE omitted.

In this blog post written by Katie, you can read the whole story and see the astounding degree that these people went to in their censorship.

One can’t blame some fans for believing in the happy Jeanette-Gene love fest, as this was crammed down their throats for years. The deliberate sabotage and attempts to belittle Nelson at every turn cannot be ignored.

That forbidden word LOVE stricken from this fairly innocent letter boggles the mind.

In addition, note that Nelson signs off the letter NOT with the word  “sincerely” but “sincerity.”

There is an “and” symbol, the ampersand – & – written after the word “love.” In other words, what Nelson is actually writing is: “Give her my continuous love & sincerity.”

The dictionary definition of this word: “the quality of being free from pretense, deceit, or hypocrisy.” The first synonym listed for this word: “honesty.” Other synonyms are: genuineness and truthfulness.

Nelson Eddy was a master with words and here he is offering his “continuous love & sincerity” in such a truthful but sneaky way that this probably went over the heads of most others reading it.  Otherwise, who knows, the self-appointed censors might have whited out that word as well!

Thanks also to Angela sharing the original letter.