Sandy Reiss worked in all aspects of the film related business, from PR, newspaper writer, movie magazine writer (under pseudonyms, he said, one of which he shared with me), east coast and west coast, to movie-related charity fundraisers, also police charity fundraisers in Los Angeles. He was best man at Maureen Reagan’s wedding. Also an athlete, he swam the English Channel in 1951 in 17 ½ hours; in 1953 he swam the Catalina Channel in 18 hours. He had a local sports TV show at some point in the 1950s and in 1968 was among the first U.S. journalists allowed with other Americans into Red China to view athletic programs there. Sandy was the first celebrity willing to go on videotape about the MacDonald-Eddy affair and convinced others to speak freely. He eventually contributed two magazine interviews, two videotaped interviews and a notarized affidavit regarding what he knew. He also attended some of our events and was responsible for the attendance of some other celebrities such as Ida Lupino or Iron Eyes Cody (pictured below) who was in the film Rose Marie). 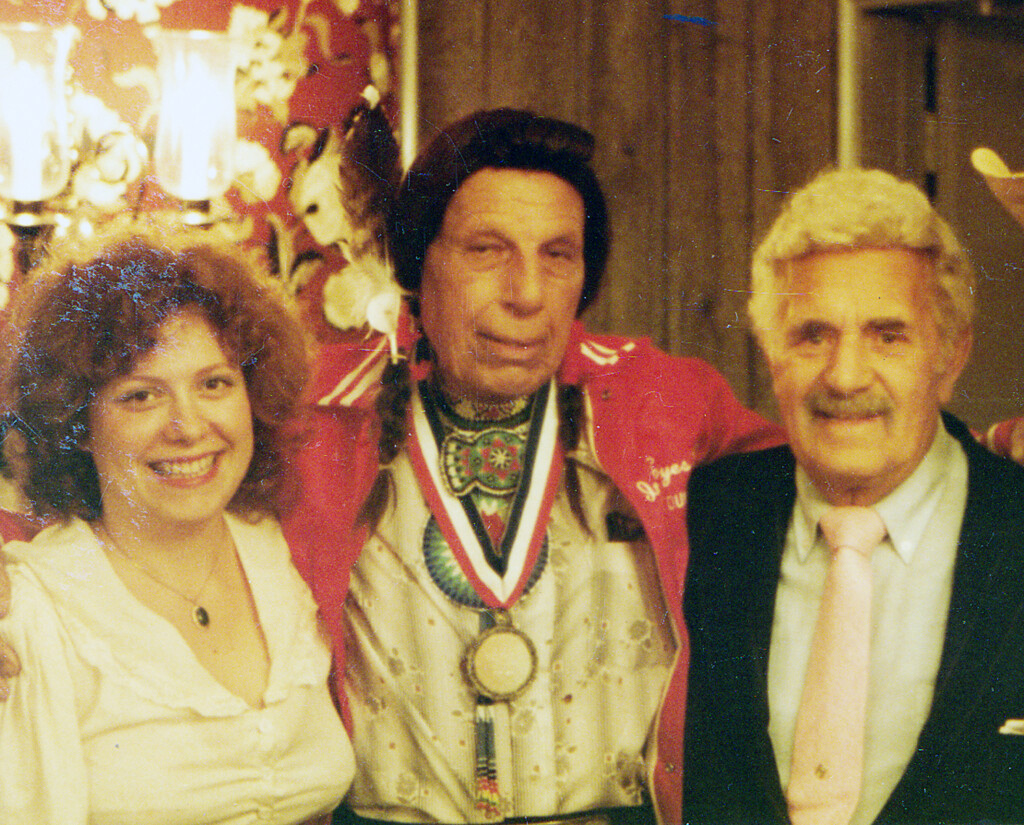 Sandy was originally New York based but, as with several newspaper writers across the country, knew the real story and became friends (in this case, more with Jeanette). Others in the small group of reporter confidants and longtime friends included May Mann (to whom Nelson proposed marriage in the months before Jeanette married Gene Raymond), and Lily May Caldwell (Jeanette’s friend). Sandy stated in his video interview that he saw for himself that Jeanette and Nelson were intimate when, after the filming of Naughty Marietta, he was in LA and Jeanette asked him to deliver a script to her in Santa Barbara. To his surprise, Nelson opened the door of the El Encanto bungalow, clad only in his underwear while Jeanette in her birthday suit could be seen down the hall pulling on a bathrobe.

Sandy introduced us to a variety of Hollywood charity events, celebrities and groups in the late 1970s, several of which were noted in our early magazines. He arranged for Diane Goodrich and myself to answer phones at KTLA, a local TV station hosting the yearly Arthritis Telethon, an event at which Sandy was working. Gene Raymond was there and we witnessed the two of them having a brief, rather cold conversation. Some of the data Sandy told us about Jeanette and Nelson was verified at that time and some decades later. Just a sampling:

The excerpt below is from Issue #15, and includes some of his answers to a written list of questions.

Photos below: left, Sandy Reiss and Miliza Korjus were guest speakers at a Mac/Eddy Club meeting; right: Sandy was the first celebrity to agree to be videotaped re: the MacDonald-Eddy affair. Article and photos copyright ©1979, 2006, all rights reserved. Question: When did you first meet Jeanette and Nelson?

Sandy Reiss: I met Jeanette during a luncheon at which the wonder boy Irving Thalberg of MGM was honored….Nelson I met during the filming of Naughty Marietta.

Q: You worked as a writer in those days. Why didn’t you—or others—print the truth?

SR: We couldn’t without getting hit. In those days, every article had to be approved by the publicity department before going to press. Very little was allowed to “slip through,” and if it did, it meant your job and possibly your career. Even Hedda and Louella had to keep things under wraps, though it killed them to do it. There was an article that came out in the late ‘30s about stars who were living together—Gable and Lombard, Stanwyck and Taylor. It caused such a furor the stars had to marry. Of course, the article was craftily done, but what it really said was that they were shacking up. Movie magazines changed after that, getting more and more away from actual interviews. Just as the publicity department handled fan mail, so they dictated “personal interviews” for the stars. If they did grant interviews, it was a regular practice to lie. If you were going to vacation in the Bahamas, you certainly didn’t want your fans knowing about it. So you said you were off to the North Pole.

Q: What about the circumstances after 1937?

SR: The marriage (Jeanette’s) was Mayer’s doing. Nelson later told me himself that Jeanette’s mother had a lot to do with it. She wouldn’t sanction Jeanette marrying Nelson. Nelson called her a witch, and blamed her for a lot of Jeanette’s hang-ups. In fact, Nelson thought very little of Jeanette’s family at all, with one exception. He said, “They’re all worthless, every one, except Blossom. She’s the only one worth two cents.” Nelson often didn’t make friends with his bluntness, but he was honest.

In those days there were lots of “marriages of convenience,” and they usually didn’t last more than a few years, till studio pressure was off, or the careers slipped. Knowing the kind of lady Jeanette was, you knew she’d do her best to make the best of a bad bargain. By 1938 I knew all about Gene; I’ve done a lot of work for police charities, and my friend at the LAPD kept me informed as to Gene’s latest escapades…. Jeanette filed for divorce the first time shortly after he was arrested in early 1938. The case number has been tampered with but we were still able to find the original record. I don’t know how many times Jeanette had to shell out money to keep this type of thing out of the papers, but it caused her no end of grief….

Nelson and I talked sometimes. He liked to talk about her, his face lit up. He told me once, “I can be singing before a crowd of five, ten thousand, and if she’s there, I’ll know it instantly.” Of the two, I was closer to Jeanette. In later years I used to drop by to see her at her home, Twin Gables, for forty minutes or so. I’d end up staying four hours, she was that lonely. She needed to talk, and I was willing to listen. Jeanette MacDonald was the loneliest woman I knew. She was also the most wonderful. Q: What about Nelson’s marriage?

SR: A mistake from the first. We were at a party once, Nelson without Ann. He was having a great time. Then someone said, “How’s your wife?” or “Where’s your wife?” or something of that sort. His face turned thunderous. “Don’t ever ask me again,” he said curtly.

[Jeanette’s] heart belonged to her first and only love in her life, Nelson Eddy. There were many scenes in the home that were dreadful, living with a man forced on her. I witnessed some of them and I can tell you, it was a living hell. I don’t know how she put up with it. I think she was afraid to try to change things. There were so many people to pay off….That beautiful woman, she never hurt anyone, was made to suffer every day of her life.

Q: How did Nelson react to her death?

SR: I saw him a few months afterwards, he looked ill, hadn’t shaved and was drinking. It was unlike Nelson to be uncaring about his appearance….His eyes filling, he mumbled, “I still can’t believe. After all this time, I still can’t believe she’s gone.” He was crying now. “I can’t deny it, I loved her, I never stopped loving her.” I knew he would not live long. There was no fight left in him.

Q: Why do you think the story has been so tenaciously hushed up?

SR: It’s no secret in the industry. Some celebrities prefer stories like this not to come out, and usually they have their own problems to hide. I’ve talked to Gene about it…he won’t do anything because he’s getting off easy and he knows it. He has his own guilt to live with. I worked with him most recently on the last Arthritis Telethon he did, but he can’t do those anymore….The way I see it, certain people have done enough damage to two beautiful people, two innocent people, whose only crime was being in love. I hope they’re together now, and at peace. They deserve it.