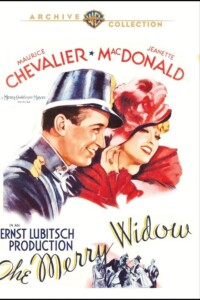 …. “The Merry Widow” stars Jeanette MacDonald and Maurice Chevalier (in the last of their musicals together) and/or France, which for Lubitsch was a mythical kingdom in itself. Lubitsch, who was born into a prosperous Jewish family in Berlin in 1892, supposedly told an interviewer: “I have been to Paris, France, and Paris, Paramount. Paris, Paramount, is better.”

In his films, Paris becomes the fantasy capital of perfect freedom, tolerance and joie de vivre, qualities that were becoming difficult to find in the real Paris of the Depression, and by 1934, essentially unknown in Lubitsch’s hometown.

“The Merry Widow,” which has now been released by the Warner Archive Collection in a remastered edition with a much improved image and soundtrack, stands apart from the earlier musicals, both because it is based on an established piece (Franz Lehár’s 1905 operetta, which had already inspired two silent-film adaptations, by Michael Curtiz and Erich von Stroheim), and because it was made at MGM, where the atmosphere was hardly as free as it was at libertine Paramount.

But it is also a more reflective, somber and emotionally ambivalent film than Lubitsch’s earlier efforts, a movie that seems very much aware of the passing of time and encroaching mortality that the earlier works had so elegantly suppressed.

Chevalier is back as the irresistible roué, cheered by grateful women of the microscopic country of Marshovia as he marches with his military unit through the streets, and as in “The Love Parade” and “Monte Carlo,” MacDonald is a woman of power and independence. (No longer a queen, she is something better: a wealthy widow with an interest in 51 percent of Marshovia’s livestock.)….

The gigantic set, populated, according to the studio, by 600 extras and illuminated (at least partly) by gaslights, represents the high production value that was MGM’s trademark, yet the densely packed, shadowy interior is hardly typical of the studio’s brightly expansive house style. This does not seem to be an entirely happy place, despite the squeals of excitement from the women in residence when Chevalier’s Captain Danilo makes his triumphant entrance.

For Lubitsch, the impersonal manner in which Danilo orders around the Maxim’s girls The French critic Jean Douchet has proposed Lubitsch’s 1919 German silent film “The Oyster Princess” as the first movie musical, citing that film’s great sense of rhythm and counterpoint, and the carefully choreographed movement of the highly stylized characters as they glide across the almost abstract sets (the film could be the only comedy influenced by “The Cabinet of Dr. Caligari”).

The sets of “The Merry Widow” may have been designed by Fredric Hope and Cedric Gibbons (who won Oscars for their efforts), but with their bold use of contrasting black and white (a theme picked up in the costumes by Ali Hubert and Adrian), the film bears an unmistakable resemblance to “The Oyster Princess,” as if both movies were line drawings from the same hand. And as if to illustrate Mr. Douchet’s point about the musicality of Lubitsch’s direction, the film offers a climactic court-martial scene in which the dialogue is played as recitative, with an underscore that weaves in and out of the “Merry Widow” theme….

You can order the film at this link.

The Merry Widow, Cat and the Fiddle and Let Freedom Ring on DVD! 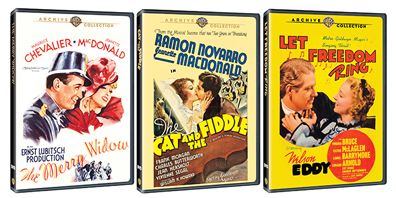 Three new films are being released on DVD: The Merry Widow, The Cat and the Fiddle and Let Freedom Ring.

They are available for pre-order at a special price at MoviesUnlimited.com.

Another of the eight Jeanette MacDonald–Nelson Eddy films has been released on DVD!

Bitter Sweet is now available…  It was their 7th film together and their second together in Technicolor.

Link to purchase this film