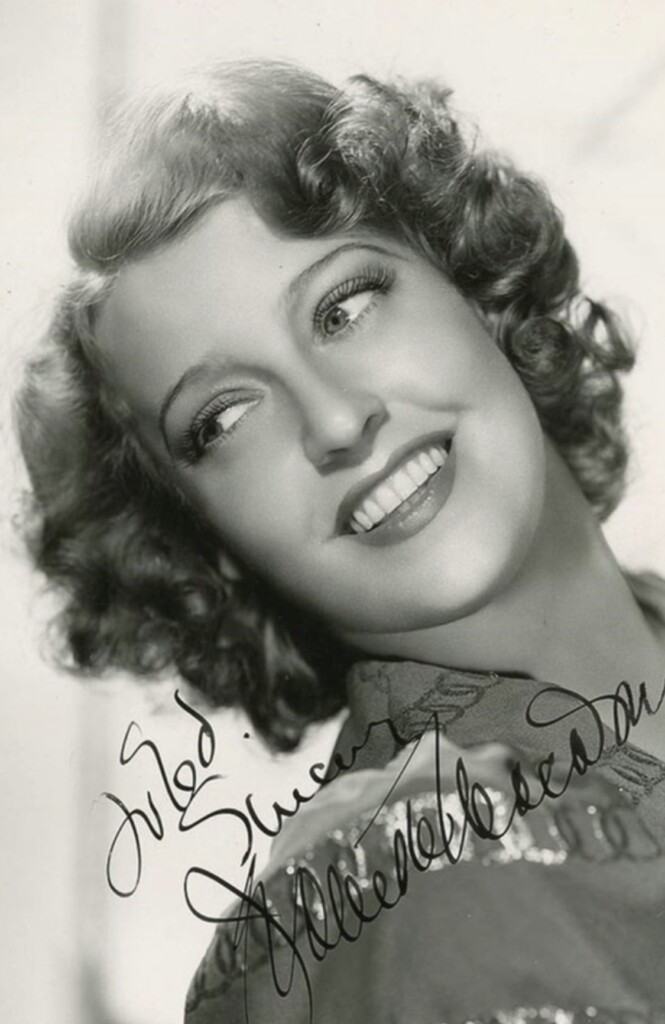 The irony of two close sisters… both died on January 14. Jeanette, the baby of the family, died in 1965 and Blossom followed her in 1978. It’s because of Blossom Rock that we’re here today… she insisted the  Jeanette MacDonald-Nelson Eddy story be told, not the PR version. She’s pictured here apparently in her last TV role, a 1966 episode of Sherwood Schwartz’s “It’s About Time,” a caveman comedy. Thank you, Blossom. This is more how she looked when I knew her. We will remember… 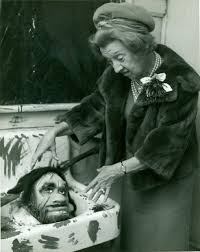 The calendar is wire-bound, 11 x 8.5″. Each month features a different fabulous, glossy photo annotated with dozens of NEWLY UPDATED, interesting, informative and fun dates, facts and events in the lives of Jeanette and Nelson. Thank you to Don, also to Maria Escano and a couple other good folks who helped compile the calendar this year. None of the photos for each month have been used in a previous calendar, and at least one of the photos was completely new to me! (And that’s saying something since we’ve used over 500 photos in calendars!)

Please click on the order link here for more details. Orders placed now will be shipped after Thanksgiving.

Happy 118th birthday, Nelson Eddy! “Ever since I was a little boy and used to sit in Grandma’s darling old kitchen and dream my boyhood dreams, I have been trying to find myself. Now I know that all the years of sorrow and suffering have been only as God intended…. My darling – how shall I explain the pure and Holy Spirit that possesses me when I hold your body – more precious than any priceless jewel?” Nelson Eddy in his diary to Jeanette MacDonald, 1946; excerpted from Chapter 24 of “Sweethearts,” free to download today with Kindle Unlimited: https://www.amazon.com/gp/aw/d/B00KTHKRGG/

“Maytime”: sing to the tree…

Happy May Day! A good time to watch “Maytime” with extra insight.  “Nelson… could not sing and look at her without crying. [Director] Leonard finally instructed Nelson to look to the tree beyond and sing to the tree…” From “Sweethearts”, Chapter 11.

From the last will and testament of Nelson Eddy: “I believe the body is useless after death… let there be no sorrow over the remains, for at that time I believe the soul will have found its destined way to the infinite.” (June 29, 1901 – March 6, 1967.)

Here it is… with a beautiful cover by Don Schumann.

Each month features a different fabulous, glossy photo annotated with dozens of NEWLY UPDATED, interesting, informative and fun dates, facts and events in the lives of Jeanette and Nelson.

These make great gifts for yourself or any Mac/Eddy fan! If needed, we can drop-ship a gift calendar for you and if you request, this month we will include a holiday card for a drop-shipped order as well; just write  what the text should say in the “order notes.”

The order link is here. Enjoy! 🙂

Armistice Day 2018 centennial – we will remember

Above we see a shot from “New Moon” with Nelson Eddy … and Buster Keaton to the right of him.

Buster Keaton was a WWI veteran. Today we celebrate Armistice Day 2018 … the 100 year anniversary. Through all my years of research I was lucky enough to meet and interview several Hollywood folks from the silent years and onwards who participated in WW1. For example, if you’re an old movie buff you’d probably recognize character actor Ian Wolfe (pictured below) who appeared in many great films (including “Maytime” and “The Firefly”). Wolfe was a WW1 vet and a client of my father’s.

I also met Buster Keaton (he was mostly cut out of “New Moon”), who lost much of his hearing during WW1 while fighting in France. Remembering that great generation today… thank you .

We already know the WW2 contributions made by Nelson and Jeanette. Let’s honor all these folks today: