Jeanette MacDonald, filming “Sweethearts” and the fall on the stairs 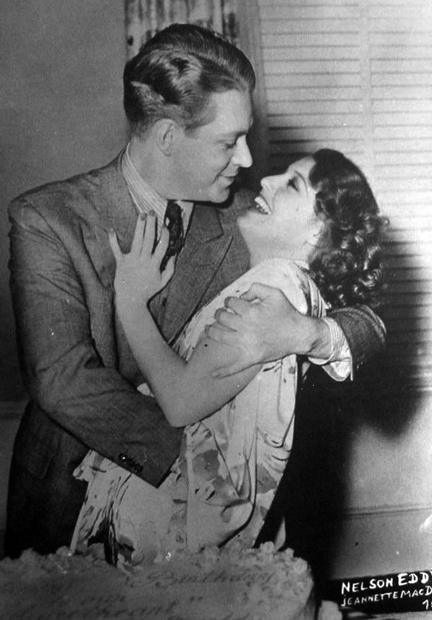 In the photo above, a candid taken of Nelson Eddy about to kiss Jeanette MacDonald on her 35th birthday, June 18, 1938, shows a noticeable baby bump that was normally hidden among the folds of her costumes used in their current film project, Sweethearts.

In the book Sweethearts I describe an unfortunate incident that took place. The date of this incident is unknown. But because Jeanette wears the same gown as worn on Nelson’s birthday, June 29, shown below,  it is likely that it was shot about 10 days or so after the photo above on Jeanette’s birthday. Note that in this photo, Jeanette is busting out of her dress in the bosom area; the bra size for this dress is now too small. 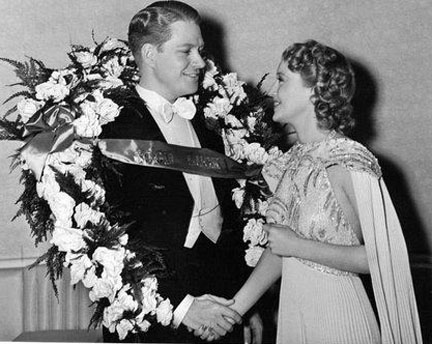 By comparison, here is Jeanette when not pregnant, quite flat-chested. 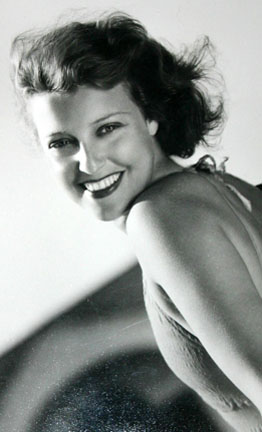 Here is the “Pretty as a Picture” dance sequence, also in the same dress, in which Jeanette’s pregnancy is noticeable. 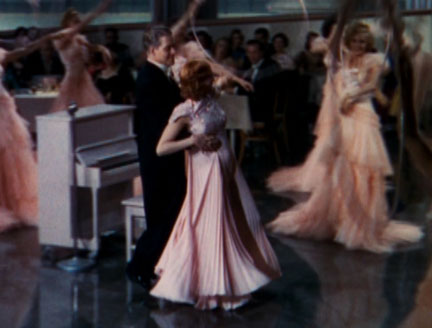 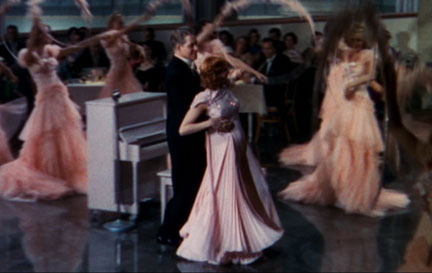 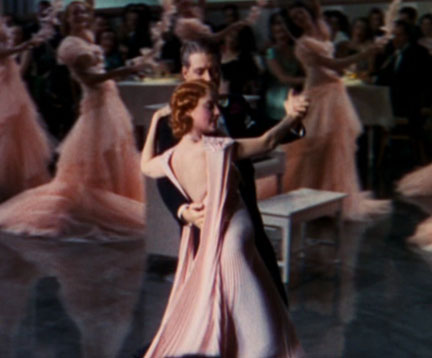 In the scene when the accident occurred, Jeanette – wearing a long flowing pink dress – is exasperated and runs up a flight of stairs to tell her husband, played by Nelson Eddy, that they should leave New York and go to Hollywood. In this scene, the rush up the stairs was filmed in one shot. Then there is a cut…and the next shot is Jeanette rushing into the upstairs room and telling this to Nelson – and her hairstyle is slightly different so it’s obviously shot at a different time.

What occurs on film is that Jeanette runs most of the way upstairs, trips, falls hard on her stomach and slides down several stairs. If you watch carefully she turns slightly to the side both to catch herself and also to protect her abdomen. 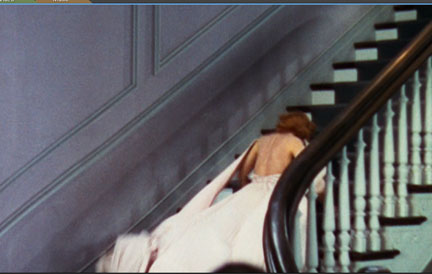 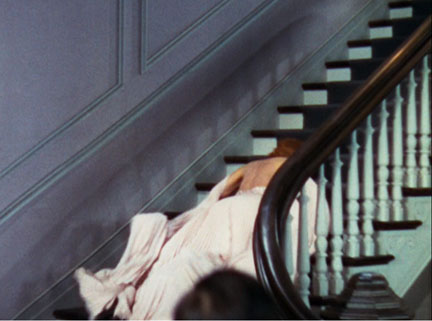 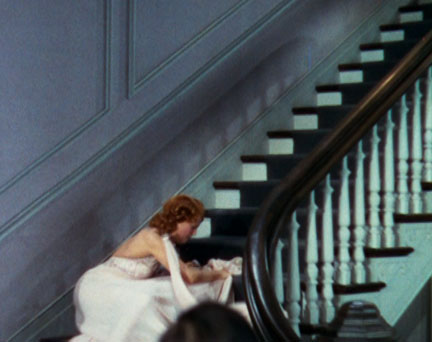 Then what happens is: the actors playing her family call out for her to be careful, she picks herself up, turns to the camera with a face redder than the Technicolor makeup, says angrily, “Why? Am I going to fall again?” And rushes up the rest of the stairs.

In case one thinks this was in the script – no indeed, it was not. This was one of those bloopers that director Woody Van Dyke left in the film because…well, he wasn’t going to re-shoot this. Below is the original MGM studio script showing that none of the above was intentional. You will note that the script suggests that Jeanette’s dog Brunhilda was supposed to run up the stairs with her but that was scrapped obviously. It would obviously have been too dangerous and there was the chance that she would trip, either over the dog or her dress.

This fall, though serious for someone in her condition, did not result in the immediate loss of her baby.

Here’s another shot apparently taken on July 16 and she is still pregnant, even though heavily girdled. If you click on this photo you will see the larger view.

Some new information has come to light since the publication of Sweethearts to indicate that Jeanette’s hospitalization occurred a few days earlier than we had previously thought. Because the public announcement came on Monday, July 25th that Jeanette was in the hospital – it only hit the newspapers on Tuesday the 26th. The assumption was that she was hospitalized on the 25th for her “ear infection.”  But now we have learned now that she was in the hospital prior to the weekend so her collapse on the set would have occurred somewhere between the 19th and 21st. Which day it was is unknown, but since this data became known, we have done a careful look through literally many hundreds of photos for the pertinent dates. Studying the set shots,  news clippings and script revisions, we find the latest date that Jeanette was involved in photo shoots, candids or any dated material on the set was Saturday, July 16.

Another curious fact is that on the 22nd, Hedda Hopper published that on the previous Sunday (the 17th), Jeanette and Gene hosted a party in their home where the guest list included Nelson, Ida Koverman, Helen Ferguson (Jeanette’s PR person) and Hedda herself. This looks to be a very convenient guest list and an attempt to make everything look normal and newsy on the Jeanette-Gene front. (Another blurb stated that Jeanette and Gene hosted this party for “friends from the east.”) Since Hedda was very much aware of Jeanette’s pregnancy and the aftermath – and since she landed the photographic scoop of photographing Jeanette in bed and discussing in a roundabout way the fact that she had been pregnant –  it is a likely assumption that damage control was in place as early as the 22nd. And that Hedda helped out with it (in exchange for her scoop) by showing how lovey-dovey Jeanette and Gene were. In fact, another blurb also published on the 22nd indicated that Nelson had sung at a police show earlier in the week.  These attempts at normal news would affirm that we are looking at somewhere between the 19th and 21st, due to the scramble for “normal news” published on the 22nd.

A blurb on the 27th noted that Gene Raymond had taken a room in the hospital to be near Jeanette while she was hospitalized for supposedly minor issues. Variety reported that she was released from the hospital on Wednesday, the 27th.

On July 30, The Hollywood Reporter published the blurb quoted in the book, “What two people who everyone thinks are very far apart are still very close?”

I will be posting a complete timeline of all the newspaper coverage and everything we know about the events during this time period.

Another new piece of information is that along with the finale and montage sequence, the radio segment (in which Jeanette wears the charm bracelet given by Nelson for her birthday), was also filmed in  August when Jeanette returned to the camera.  “Summer Serenade” was her first scene – and so this is also a correction in that the muff she held in front of her stomach, originally we thought it was to hide the pregnancy but since it was so soon after, perhaps it was now to hide the fact that she wasn’t back in shape.

The scenes filmed in August-September included the radio show sequence, Nelson re-doing “On Parade” (it was filmed once with him in uniform and once in a suit), the montage and the finale.

We know that Jeanette was hospitalized again in mid September and that on the 20th it was noted she was in the hospital for her “inner ear infection.” But once again, we’re not sure the exact date she entered the hospital. What we have now clarified is the date of her “road trip” with Nelson to “the Redwoods,” since it was stated as “a week” the dates would have been from Monday, September 26 through Saturday, October 1st. They stayed at the Benbow Inn in Garberville (200 miles north of San Francisco). Since Nelson was singing on Chase & Sanborn on Sundays, their vacation would have had to begin on Monday and end on Saturday.

Seeing Jeanette’s charm bracelet up close on film and documentation of other events during the filming of Sweethearts will be covered in future articles.

Thanks to Bernadette Schwartz, Maria Escano, Katie Gardner and a couple others who asked not to be named for helping both with the research on this and the photos and screenshots.