This is Your Life – what to watch for 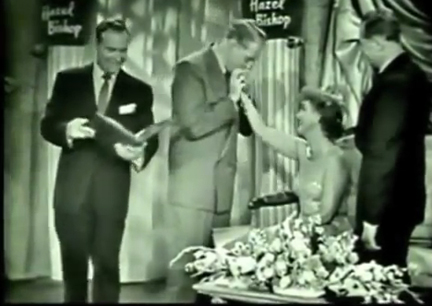 There are many folks reading the book Sweethearts and learning about the behind-the-scenes lives of Jeanette MacDonald and Nelson Eddy for the very first time.

It is fascinating that for all their secrecy and attempt for privacy, many of the major events in their lives played out while filming (and are visible to see on-screen) or otherwise in the public eye. A case in point is the November 1952 reality TV show, “This is Your Life.” Jeanette and Nelson had been separated for two years when this live episode brought them back together, professionally and personally.  It is discussed at great length in the book (and the aftermath) but suffice to say that we observe every aspect of Jeanette’s personal life – from her differing relationship with her two sisters, to a comparison of her feelings for both her husband and Nelson Eddy, so visible both in body language, reaction and spoken words. This episode captures it all.

Perhaps you have already watched it. Or some of you may have not. Either way, it is worth watching again carefully to notice the following:

1. The difference in Jeanette’s reaction when her sister Blossom enters the stage and when the oldest MacDonald sister Elsie makes her appearance. Jeanette wrinkles her nose and says, “Is she here too?” In contrast, with Blossom, Jeanette smiles and nods…of course Blossom is there…but notice also that she starts to think a bit about what this all means. She’s smiling…but you can also see her thinking. Probably something along the lines of: Blossom is here…Nelson’s car is parked in the lot (this was inadvertently revealed to Jeanette as they were parking)…can it truly be? I think Jeanette figured out that Nelson would not have agreed to show up without an intervention by Blossom.

2. Jeanette’s nervousness as Ralph Edwards begins mentioning her film career and her great co-star Nelson Eddy.  If you look closely you can see her take a quick breath and her head goes down. And throughout the show when Nelson is mentioned, her head goes down immediately (though the camera usually cuts). And at other times you can see her worrying about it, looking off, lost in thought, a wry smile as she looks back at Ralph Edwards, trying to focus and listen to what he’s saying to her. And yet another time she looks around nonchalantly. She is definitely struggling with her emotions and the anticipation.

3. Jeanette’s indifference to Ralph Edwards’ comments about the death of her mother, Anna MacDonald, who had been “her guide and inspiration.”  Yeah, right.

4. Jeanette looks down, embarrassed when the man who married her and Gene goes on about their wonderful marriage and how they’ve exemplified “the bonds of holy matrimony.”

5. The priceless bantering between Gene and Jeanette when they talk “on the phone” before she realizes he is there. She asks if Gene (supposedly in New York) will be home (after the show if she calls him). Yes, he replies, there will be no late date tonight. He’ll wait for her call and make the date afterwards. Ralph Edwards is horrified.

6. The body language between Jeanette and Gene when he comes on stage. A nice familiar hug, nothing sensual, they sit down on the couch, each one at arm’s length as they find their places – a distance between them. Gene doesn’t put his arm around her, there is no tenderness shown. Jeanette glances over at him once with a smile but they could be brother and sister for all the intimacy that is shown.

7. The difference in body language when Nelson shows up. Jeanette melts into his arms, they hug too long, she pulls back and looks at him with stars in her eyes. They hold hands…and continue to hold hands to the point of it being noticeable…so he kisses her hand and finally lets go.

8. Jeanette’s reaction to Nelson’s appearance. The show is nearly finished and once again Ralph Edwards starts up again about an old friend… Jeanette bites her lip, her breathing sharpens, she sits up straighter. At just the sound of his voice her head goes back – no other word for it – a look of ecstasy on her face – and then the tears come.

9. Gene’s reaction all throughout, some annoyance and anger but what can he do? He hands her a handkerchief and tries to be relevant when Nelson shows up.

10. Nelson’s inability to be phony or to say his scripted dialogue. He never claimed to be a good actor, he also had little pretense and so there is no conviction in his delivery of the blatant lie he’s supposed to say (about how the greatest joy of their association was singing at her wedding). He lamely starts the sentence and then just awkwardly trails off! Leaving Jeanette to bail them out and smoothly handle it which of course she does.

11. The hand-holding which goes on far longer than it needed to. The intimacy between Nelson and Jeanette, the familiarity, the warmth between them, the way she looks at him…all so telling.

12. Note that Nelson tosses his sheet music aside, across the floor as he reaches Jeanette on the couch. That way he can hold her hands.

Remember that Nelson’s physical reaction to Jeanette is real-life, not scripted. This is not a movie scene. They are not on a studio set. Yet Nelson takes her hand and caresses her fingers. He kisses her hand. He doesn’t let go of her hand until way past necessary. And he seems totally unconscious of the fact that he’s making love to her hand in public.

So for those of you who wondered whether it was just acting in their movie love scenes – you have your answer. He did this in real life. He didn’t consider himself a good actor and he was never this passionate onscreen with any other movie co-star. On screen he reacted to Jeanette because he adored her. Despite the fact that they were separated at the time of this TV show and he was no doubt bitter still at being “dumped” by her (his words), he could not help himself. He responded to her as he always did.

And as for Jeanette, you see her genuine feelings as well. Not just her nervous fear as the show progresses, or her look of ecstasy and tears over his appearance, but the look of adoration she gives him, just standing and looking at him. Try watching her face in that scene just once just instead of Nelson. She is like a star-struck fan. She looks like she feels she’s the luckiest girl alive that he is there singing to her or paying attention to her. All her social veneer falls away and you see the real heart of this woman. And sadly, there was no even vaguely similar reaction when her husband of record showed up earlier in the show. That she shut herself off emotionally when Nelson wasn’t around seems painfully evident. She just got on with her life as a mature Hollywood star all through those years and the show but when Nelson made his entrance, there was a glimpse of the shy adoring girl that Nelson wrote of, that he fell in love with, that he sought to bring forward in their relationship over the years. She could show that vulnerability onscreen, but he sought to cultivate it in real life and from his letters you can see that it was a real turn-on for him.

Below is the scene just with Nelson’s appearance…and the full show minus the commercials. I recommend you watch the full show if you can to get the sense of Jeanette’s nervous buildup to the finale.

A classic moment in live television indeed…even if the audience didn’t truly realize what they were seeing. 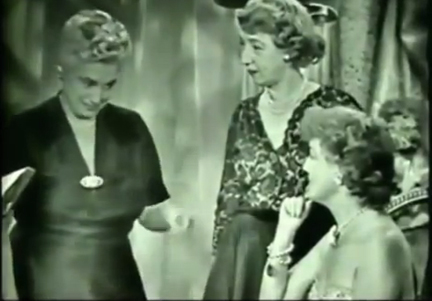 Above: the three sisters, Elsie, Blossom and Jeanette. Below, she is noticeably distracted and nervous, wondering if Nelson will show. Her attempts to look nonchalant fail. 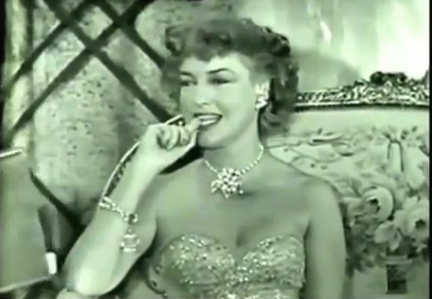 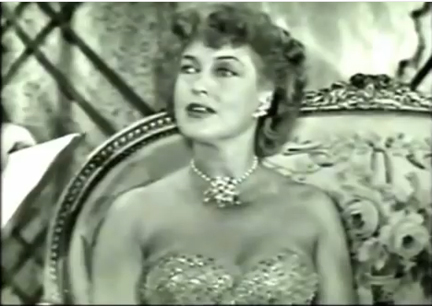 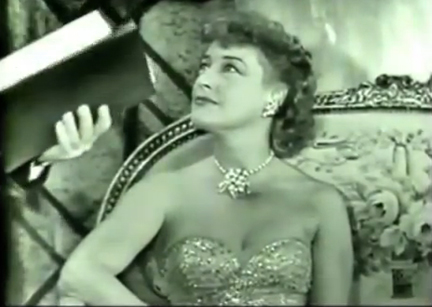 And her breathing changes sharply when she thinks he will make his entrance. Notice the distance between her and Gene on the couch. And when Nelson enters, one would think that they would hug or snuggle together, after all, Nelson is singing the song he sang at their wedding! Shouldn’t they feel nostalgic and happy about their happy wedding day? But no, that is not the reaction at all. 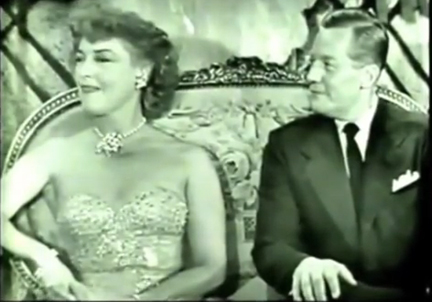 Her last attempt to keep her composure… her eyes already filling at the anticipation…and  at just the sound of his voice, her head goes back and then the tears come. 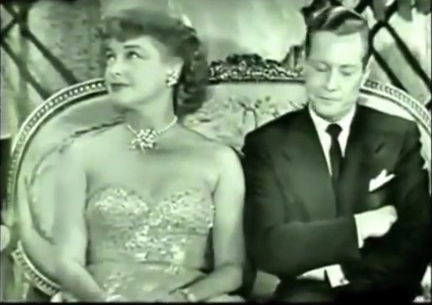 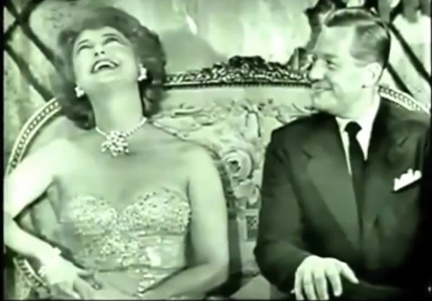 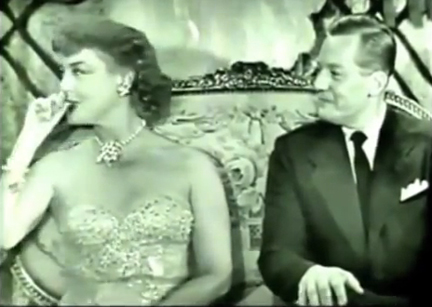 And the aftermath…as Nelson sings and speaks to her… the stilted forced dialogue about the happiest day of his life was singing at her wedding, etc. And the hand-holding that went on for an embarrassing amount of time.

« Jeanette & Nelson 2015 calendar! » Nelson Eddy, a lively “corpse” in The Girl of the Golden West