Our club featured in Pittsburgh Newspaper 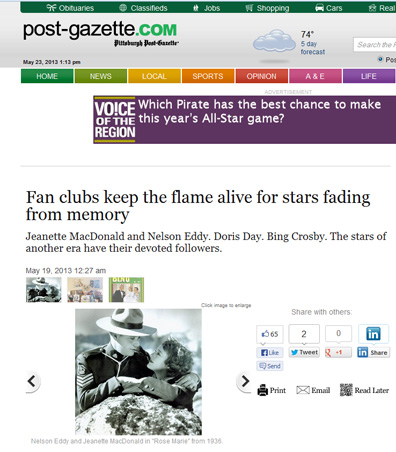 Here’s an article that appeared to help promote our club meeting this last Sunday in the Pittsburgh area.

Let me say that our Facebook group page was just started in February 2013 and the numbers are increasing.  Apparently size DOES matter so if you are on Facebook please join our group and help our presence there to grow! Click on this Facebook link to join.

Below is an excerpt from the Pittsburgh News-Gazette article. (Click on the photo above to see the entire article.) We had a lively meeting and the Mayor of Heidelberg, PA attended with his wife!

Jeanette MacDonald and Nelson Eddy. Doris Day. Bing Crosby. The stars of another era have their devoted followers.
May 19, 2013 12:27 am

Barry N. Wood, president of the Pittsburgh chapter of the Nelson Eddy/Jeanette MacDonald fan club, has a large collection of memorabilia of the movie stars at his home.

Barry Wood is a devout Presbyterian, but today he’ll also be worshipping at the altar of two other gods.

Even for those who have never heard of the singing screen duo — and they are out there — this should be a lively meeting.

Ms. Rich, of New York, is the author of “Sweethearts,” a lurid expose of the secret love affair between the two — complete with suicide attempts, illegitimate pregnancies and marriages to others — that lasted for nearly three decades.

“Seeing them on the screen, it’s almost a spiritual experience,” said Mr. Wood of MacDonald and Eddy, who made eight film musicals together between 1934 and 1942. “There’s something about the quality and timbre of their voices that touches my soul.”

As fan clubs go, the MacEddy club probably can’t match the size of Justin Bieber’s, or Elvis’. As of Friday only 249 people “like” the MacEddy Facebook page. Of course MacDonald and Eddy haven’t been around for a while. Both died in the mid-1960s.

And therein lies a problem: a certain generation of studio-protected gods and goddesses created during Hollywood’s Golden Age have probably reached their sell-by date — or at least their fan clubs have.

Whether founded out of loneliness, obsession or as part of a long-ago publicity stunt dreamed up by a studio flack, some fan clubs dedicated to these mid-20th century icons endure, while others don’t. Some are in bricks-and-mortar shrines, often in dusty, out-of-the-way hometowns, others are online and have Facebook pages. All of them are trying to remain relevant in a noisy pop culture that produces new stars every day.

Jimmy Stewart’s museum in Indiana, Pa., has had its financial woes, although recent contributions by Bridgeville native Ken Schultz have eased pressures somewhat. On Interstate 95 in North Carolina, there are signs pointing to the Ava Gardner museum in Smithfield — which eagerly solicits donations from “Ava Advocates” on its website. At the Mario Lanza Institute in Philadelphia, the once famous movie star and singer gets a trickle of visitors each day.

Doris Day — who is still alive (at age 89 or 91, depending on the source) and living in Carmel-by-the-Sea, Calif. — has only one fan club left (in Australia), according to the DorisDayTribute.com page, which was clearly founded to keep nosy fans at bay. (One FAQ: “Can you help me meet Doris?” Official, exasperated response: “No. This site is a fan tribute and we don’t have a direct hotline to Ms. Day.”)

So just who are these celebrities, anyway?

Thomas O’Guinn, a professor of business studies at the University of Wisconsin, wrote a paper published by the Consumer Research Association nearly 20 years ago — “Touching Greatness: The Central Midwest Barry Manilow Fan Club.” He defines a celebrity as “one who is known by many, but knows far fewer, and is the object of considerable attention.”

A fan club may be fueled by a desire for community, bonding or a surrogate family (“large phone bills from calling other Barry Manilow club members are common,” he said).

Also, especially among teenagers, there may be a strong identification with the celebrity, “since no one is searching for an identity harder than a teenager, who may change one every other day,” he said.

Then there’s the religiosity aspect — a wish by the fan to be spiritually transported or healed by a celebrity possessed with supernatural properties that border on the miraculous.

During his interviews with members of Barry Manilow’s fan club, “someone would say, ‘well, so and so had a really bad case of the flu, and then Barry met them, and they got better.’ ”

In one fan’s bedroom, loaded with photos and posters and bobblehead dolls of Mr. Manilow, “the highest status things in the collection were actually touched by Barry,” Mr. O’Guinn added, including a bottle of Perrier he’d drank.

When Mr. O’Guinn visited Grauman’s Chinese Theatre (now known as TCL Chinese Theatre) in Los Angeles, people engaged in the same ritual over and over again — “almost a liturgical act. They would stoop down to be photographed placing their own hands or feet in the impressions left by the stars.”

“People don’t just look at the footprints, they have to touch them to make it real. It’s the proof of existence,” he said.

Actually, Mr. O’Guinn said he still has a Bic pen that Tennessee Williams gave him.

“I was a freshman English major at the University of Texas and Williams was coming to the campus to speak. I got there early, and the drinking age was 18 then, so I went into this bar where the only other person there was Tennessee Williams. So I sat next to him and we talked and drank for 45 minutes until his handlers tracked him down and took him away.”

For his troubles, Mr. O’Guinn got Williams’ autograph — and the pen, which he keeps in his safety deposit box.

“One hundred years from now, we’ll probably still have fan clubs for Marilyn Monroe, Elvis, Michael Jackson and the Beatles, but I wouldn’t put Nelson Eddy and Jeanette MacDonald on that list, or even in the top 100,” he said.

Ms. Rich begs to differ, noting that a film script about the star-crossed, adulterous couple is in the works.

“I get emails from people as young as 13 who say ‘I just saw “Naughty Marietta” on Turner Movie Classics and I loved it.’ ” she said. “If there is a way to watch their films, there will be another generation of fans,” she said.

“To me it’s a thrill whenever I run into anybody who likes them, too. I have a lot of MacEddy T-shirts and I wear them all summer, and people will stop and say something, people who share the same joy and appreciation that I do.”