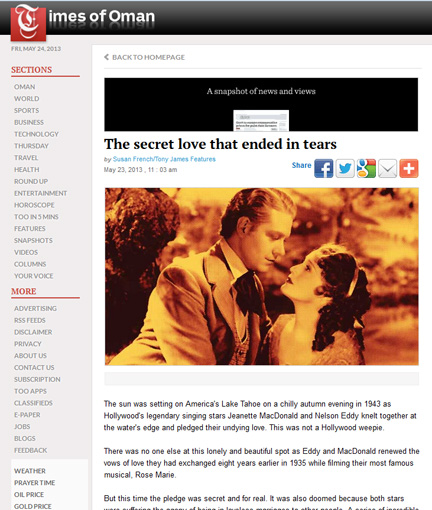 Their story is truly universal…The Times of Oman has written a feature article about Jeanette MacDonald and Nelson Eddy.
Click on the photo to see the original article, which we except below.

The sun was setting on America’s Lake Tahoe on a chilly autumn evening in 1943 as Hollywood’s legendary singing stars Jeanette MacDonald and Nelson Eddy knelt together at the water’s edge and pledged their undying love. This was not a Hollywood weepie.

There was no one else at this lonely and beautiful spot as Eddy and MacDonald renewed the vows of love they had exchanged eight years earlier in 1935 while filming their most famous musical, Rose Marie.

But this time the pledge was secret and for real. It was also doomed because both stars were suffering the agony of being in loveless marriages to other people. A series of incredible events had prevented them from ever being  married in real life, although it happened several times in movies. The stress of keeping their love secret had resulted in nervous breakdowns and even a suicide attempt.

Had the truth come out, the scandal would have wrecked both their careers. So they kept their love secret, both hoping that some day and somehow, they would be able to be together. In the meantime, they could only express their feelings to each other and as they knelt by the lakeside Jeanette took the $40,000 diamond ring Eddy had given her and which she wore concealed on a cord around her neck, and handed it to her lover.
He slipped it back on to her finger with a kiss and the words: “Your life is bound to me for ever.” Then they returned to the remote cabin in the hills for the next three days — their legal partners believed they were on movie location. Jeanette MacDonald and Nelson Eddy had made a string of block-busting musicals in the 1930s and 40s and were Hollywood’s most successful partnership.

And while occasional rumours circulated about their friendship, the real truth only came to light when Nelson’s Eddy’s detailed accounts of their long and passionate affair were discovered after his death.
In the meantime, Jeanette MacDonald’s apparent romantic life was keeping the gossip writers busy. In the late 1920s she dated Irving Stone — hundreds of love-letters she wrote him were found in his apartment after his death. Then in 1928, George Richie became Jeanette’s manager and later fiancé — it was rumoured they later married but Jeanette always denied it.

In 1935, she met actor Gene Raymond and used the relationship as a smokescreen to begin a clandestine affair with Nelson Eddy with whom she was starring in Rose Marie. She later called the summer she spent filming on Lake Tahoe “the happiest time of my life.” While on location they became secretly engaged. When Jeanette became pregnant, she was ordered by studio boss Louis B. Mayer to have an abortion. She never revealed who was the child’s father, but in his memoir, Eddy admitted that he was.

The following year Jeanette married the long-suffering Raymond and remained his wife until her death. The relationship was an unhappy one — Raymond was constantly unfaithful and Jeanette told Eddy: “I only come alive when I am with you.” During the time they were movie partners MacDonald and Eddy built up the illusion that they didn’t like each other much and Jeanette actually walked off the set when they were making Naughty Marietta and refused to return until Eddy had apologised for his rudeness.

In fact in private they were planning to run away to Reno and get quickie divorces but Jeanette took pity on Raymond and refused at the last minute. Jeanette MacDonald’s last years were dogged by heart trouble and when she was rushed to hospital in 1963, Nelson Eddy, appearing in Australia, flew back to be at her side.

In 1964, as her health again worsened, Eddy approached the pioneer heart surgeon Dr Michael DeBakey in the hope that he could improve her condition. The surgeon agreed and preparations were made for surgery but it was too late. Jeanette MacDonald died on January 14, 1965 aged 61 with Nelson Eddy holding her hand. Only after her death did Nelson Eddy reveal his true feelings for Jeanette MacDonald. Appearing on the television Tonight Show he broke down in tears after whispering: “I loved her so much…” In an unfinished biography found in Jeanette’s apartment it seemed that she had similar feelings. “When I saw Nelson for the first time I thought he had everything a man should have,” she wrote. “And for ever afterwards I never had a reason to change that opinion…”