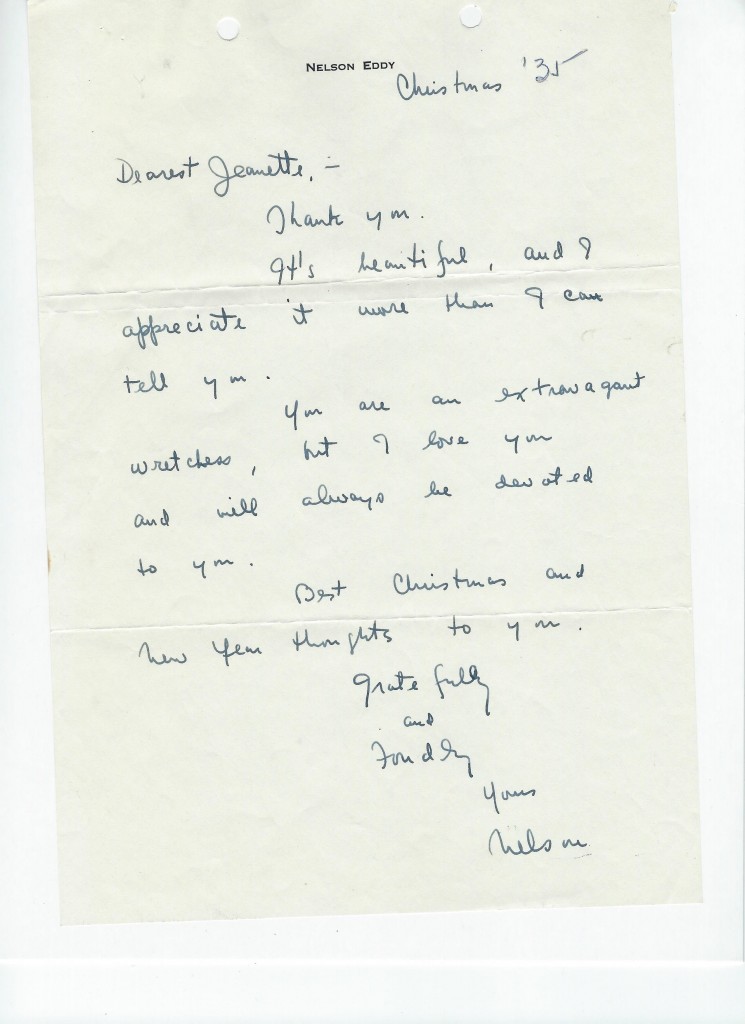 It was bound to happen, folks!

After all these decades and all the hundreds of original handwritten letters that were no doubt torn up or reportedly burned, one little ‘ol letter slipped through…and was just sold at auction.

And what a letter!

It was found among Jeanette MacDonald’s boxed-up belongings and surprise, surprise – these items were in the possession of of Clara and Tessa, in the Topeka home they shared, the two women who ran Jeanette’s largest fan club back starting in the last years of Jeanette’s life.  They were the keepers of the flame for the Jeanette and Gene blissful marriage and eventually made sure every one of their magazine covers featured a photo of the “happy” couple. They were (in case you didn’t know) on lifetime salary from Gene Raymond and they did their jobs well.

What you should know is this: they DENIED any relationship ever between Jeanette and Nelson. And they made sure that anyone who came to them asking about it were told NO SUCH DOCUMENTATION EXISTED.  In addition, they paraded out the happy Jeanette-Gene photos and letters to show how amazing that marriage was.

In one regard, perhaps you can’t totally blame the phony pretense because certainly Jeanette, Nelson, Gene, Blossom and others towed the party line for the public, press and those club publications. Irritating as it may seem now, all of them politely played out their politically correct roles. For decades.

One earlier letter of Nelson’s also slipped through and was auctioned, dated November 1934, at a time when Jeanette had rebuffed Nelson’s first marriage proposal and he was being very proper and gentlemanly, not to scare her off with his impulsiveness or acting “like an animal”. In that letter he calls her “Miss MacDonald” but blurts out: “I think you’re the grandest person in the world.”

And still ANOTHER piece of source documentation has been obtained, further shooting down the happy marriage myth with Jeanette speaking from the grave about her farce of a marriage via her 1963 desk diary.  Between Jeanette’s diary and Nelson’s 1935 lovesick letter to her, these two handwritten pieces of documentation have shifted the playing field in a major way. No longer can those who tout the happy Jeanette-Gene marriage continue the facade or their lies. Nor can they deny that the Nelson-Jeanette romance was perhaps a troubled but surely passionate and star-crossed one.

In Nelson’s amazing 1935 letter to Jeanette, he calls her an “extravagant wretchess.” And just to clear up the definition of “wretchess,” a wretch is someone who is a poor unfortunate thing or a scoundrel. He’s calling her a girl version of that, or maybe mixing it up calling her a wretch and a princess? Like a special nickname he calls her when he lovingly scolds her or she annoys him. Whatever reason he calls her that, it is a loving nickname.

Some background to this letter: just a few months earlier Nelson proposed marriage to Jeanette at Lake Tahoe, she accepted and then there was an ugly breakup. For details of what happened read Sweethearts but in essence Nelson was so very, very VERY hurt and certain he was well rid of Jeanette – who seemed to care more about her career than her feelings for him.

Yet Nelson couldn’t help himself. He loved her and termed her “like a sickness” he couldn’t get over.

And she loved him. That was never the issue with them; the love and desire was there… so the ex sex was inevitable. And by December 1935 Nelson missed their personal relationship dreadfully and wanted to Jeanette to travel with him on his upcoming 1936 tour so he wouldn’t be alone. That would have meant her cancelling or postponing the film San Francisco. They quarreled about this and his desire to have his woman at his side while Jeanette claimed she could successfully balance both marriage to him and her career.

From this excerpt from Sweethearts (which I wrote twenty-one years ago without ever knowing about this letter) we learn what happened in December 1935:

…In desperation Jeanette finally arranged to see Nelson alone and tried to resolve things with him. They hashed out things over and over between periods of lovemaking, trying to find a way a union between them could work. This marathon lasted for over twenty-seven hours with endless hours of discussions and arguments and lots of tears – mostly Jeanette’s. Finally they had to agree that it would never work. They loved each other and they needed each other but they were too similar. Neither one was willing to give an inch or sacrifice their career goals. “I used to think that Love was the most powerful emotion,” Nelson said bitterly years later. “But I found out it wasn’t. Pride is the greater emotion.” In the end, they decided to part friends, knowing they would love each other always but determined to break both the spiritual and sexual bond….The romance, as far as either believed, was over forever.

And yet on Christmas Day, what was Nelson doing? Partying? Or taking time to sit down and think about Jeanette and write her a touching letter blurting out like a lovesick schoolboy that despite his attempt to be casual and “just friends,” he was still hopelessly in love with her.

This man was 34 years old, folks! And he already knew that he would “always be devoted to you.” All his life. As indeed he was.

For those who can’t read his scrawl, this is what he states in the letter, dated Christmas 1935:

It’s beautiful, and I appreciate it more than I can tell you.

You are an extravagant wretchess, but I love you and will always be devoted to you.

Best Christmas and New Year’s thoughts to you.

I had never heard of this letter but to see how perfectly it fit in with Nelson’s torn emotions at that time – spending passionate hours with her and then determining that “it would never work”….well, this is the Nelson you see here.

So it’s a couple weeks perhaps after their brief reconciliation, he’s already going through “withdrawals” from her and showing what what a mixed up young man he was emotionally about her. Unfortunate that he was so stubborn and didn’t listen to his mother Isabel who wisely observed in her memoirs:

I had never seen Nelson so happy….As I looked at her [Jeanette], I thought how safe a man would be with her. Despite any career, with this girl a marriage vow would always come first. Alas, my son did not believe this and so the Gods forever ruled his peace away.

Folks, here it is in Nelson Eddy’s own handwriting – the answer is YES, he was hopelessly in love with Jeanette MacDonald.

So – I welcome you to shout it to the rooftops! And to the next person or publication you come across who tries to deny the Jeanette-Nelson romance – feel free to share this letter!

From the grave both Nelson and Jeanette are speaking now to us and in an ironic twist – their truths are revealed from those who lied and sought to hide the facts. But no more.

We are vindicated and validated and my thanks to all who have helped uncover the truth over these decades. And thanks to those who helped us obtain this important letter.

The discovery of Nelson Eddy’s love letter to Jeanette MacDonald from Christmas 1935 begs a question: What was the gift that he was thanking her for?

Last night I held the original letter for the first time, handed to me by Maria Escano, in whose possession it will remain until it is donated to a museum. I studied the letter and read and re-read it carefully. For over two hours we sat discussing every gift we knew Jeanette had ever given Nelson but “beautiful” is not an adjective a man uses to describe cuff-links, ties, shirts, saddles, etc. What could it be?

And then it hit me, folks. Out of the blue – I knew. A painting of her! Yes indeed, and there was such a painting, a large oil painting of her as Naughty Marietta. In fact, I knew it was mentioned in my book Sweethearts.

So I grabbed my iPhone, opened the Sweethearts book on Kindle and searched for “painting of Jeanette”. And there it was, with chilling accuracy, an oil painting GIVEN TO NELSON BY JEANETTE AS A CHRISTMAS GIFT!

That the oil painting was discussed in a 1945 letter (from which this information was quoted and sourced) is what threw me off. I never understood why Jeanette would give Nelson such a painting in 1944…no date of this gift is given, only that it hung on the wall and had been a Christmas gift! It makes perfect sense for the 1935 holiday, with Naughty Marietta their first and only team movie released, Jeanette would have chosen such a painting for a gift for Nelson.

So here is the background data: As we know, after Nelson’s marriage he moved his mother to the Pacific Palisades beach house and then to a couple different places briefly…and then in December 1944, he moved her into a new house in the Beverly Hills flats located at 526 N. Palm Dr. He always kept a room at his mother’s house.

And here I quote from the book which – again – I wrote the following over 20 years ago and had absolutely no knowledge that such a letter from Nelson Eddy was written or still existed!

[Nelson] told Ann that he needed to spend more time with his mother and he frequently stayed with Isabel. He had his own bedroom in her house and as well as a study and added a second bathroom upstairs so each would have privacy.

Ann was not allowed over to Isabel’s. Privately they were not on speaking terms but were socially polite when in public together at Nelson’s concert or radio appearances. Had Ann visited Isabel’s home she would be enraged for her husband’s study was a virtual shrine to her hated rival. A large oil painting of Jeanette as Naughty Marietta hung on the wall (a Christmas gift from Jeanette), the bookshelves displayed their records, stills, and picture albums, all the letters and cards she’d ever sent him he kept. Nelson had a movie projector in the room. His film collection included San Francisco which he loved for Jeanette’s opera scenes and Smilin’ Through.

Do you understand what this means, dear reader? Not only did Nelson Eddy love and appreciate the “beautiful” gift from Jeanette from Christmas 1935 but he moved that oil painting around from residence to residence where it was hung proudly in his “shrine” to Jeanette. Where nine years later, in December 1944, it was still displayed in his “study” at his mother’s home.

What happened to the oil painting ultimately? Who knows?

But at least one question is answered – what Jeanette’s gift to Nelson was. And much as he said he would always love and be devoted to her, the truth and verification of this was right under our noses all along!

At this link is the video presentation of the original letter and its backstory.