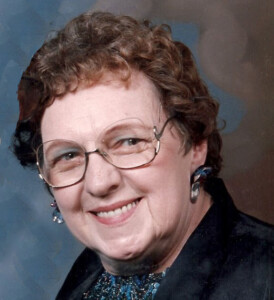 Geradine Janezic, pictured above, was a longtime club member and fan. She passed away some time ago and her daughter Joy contacted me earlier this year, asking if we would like her scrapbook. She sent it along with this letter: 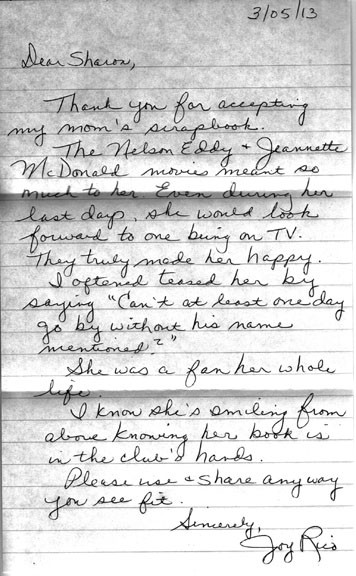 I remember meeting Gerry at a few club meetings, mostly in Ohio and the midwest area, and we stayed in touch with letters and an occasional phone call. She was a bubbly, enthusiastic person, always excited at hearing the latest Nelson and Jeanette news. I recall one particular meeting that Dorothy Dillard attended as a guest, after the initial publication of my book Sweethearts. Dorothy, my source of the Isabel Eddy letters, was from Detroit but attended several east coast meetings around that time. Back in their heyday, Dorothy of course attended many of Nelson’s and Jeanette’s concerts, club gatherings (as they followed the singers around on tour) and film screenings. Imagine their surprise when Dorothy recognized Gerry and vice versa, though it had been many years since they’d last seen each other! I was so happy to see that for them, the story had come full circle and they were able to openly discuss what had been forbidden to speak about in the  fan clubs of their youth.

Joy sent us her mom’s scrapbook and I’m happy to say that there are some interesting photos and clippings in it that I have not previously seen. We will be photographing them and using them in upcoming magazines, so all will share in enjoying them.

I asked Joy to do a writeup about her mom and to email me a photo, which she kindly did. (See above.) Below is her email to me:

Wrote a little about my mom, Geraldine Janezic.

Gerry was 12 years old when she heard Nelson Eddy on the radio for the first time. In her own words, she said “I fell madly in love with his voice!”

Staying to watch Naughty Marietta four times in a row at the theater, she became fascinated with their movies. As years went by, nothing made her happier than finding the movies scheduled on TCM. She would often write to different TV stations requesting that their movies be shown.

Even though she owned many on DVD, She’d still get up at the crack of dawn to watch on TV. She’d always say “I like knowing other people are watching the same time as me!”

Her love of the singing sweethearts continued throughout her life. When she received her first Mac/Eddy Today magazine, It was her dream come true. She was forever grateful for this wonderful tribute to them and truly treasured every issue.

As her daughter, I want to thank the club for making my mom’s world a happier place.

Thank you, Joy, for your thoughtfulness, and for sharing with our group. Our condolences and best wishes to you and your family.