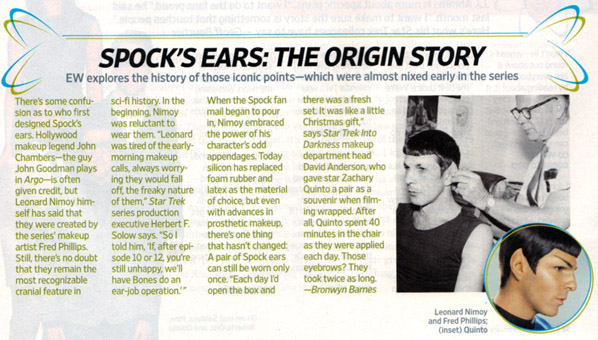 Our own Fred Phillips, who did makeup both on Jeanette MacDonald and Nelson Eddy during their early MGM teamings, was a valuable source for information about their romance. He was at Lake Tahoe during the filming of Rose Marie. Fred was very much aware not only of Jeanette’s pregnancy and the aftermath, but also the Wrath of Louie B. Mayer (towards Nelson) and Mayer’s insistence that the makeup team go overboard and make Nelson look laughable.

I met Fred Phillips through my screenwriter friend, Judy Burns, of Star Trek fame (“The Tholian Web”). She knew Fred because they worked together on the original Star Trek. Judy, Fred and I met for a long afternoon luncheon at a beautiful outdoor cafe near the beach…and later I had several follow-up phone conversations with Fred.

Above is a picture from the February 15, 2013 issue of Entertainment Weekly. The cover story features the new Star Trek movie. In the sidebar article, “Spock’s Ears: The Origin Story,” Leonard Nimoy, the original Spock, asserts that the creator of the pointed Vulcan ears was “the series’ makeup artist Fred Phillips.” The article adds: “…there’s no doubt that they remain the most recognizable cranial feature in sci-fi history.”