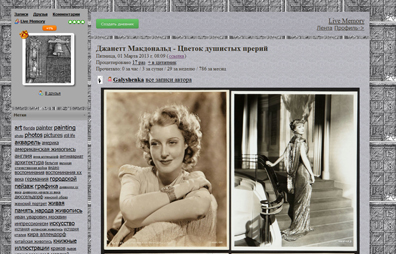 Here’s a beautiful website with gorgeous high-resolution photos of Jeanette MacDonald and Nelson Eddy. I ran the text through Google translate and came up with the following rough translation:

Sometime in the beginning of the last century without Jim songs from the operetta “Rose Marie” just did not do any operetta evening. “Oh Rose Marie, of Mary, fragrant prairie flower …” (author – Rudolf Frimley, with the participation of the composer Herbert Stotgarta, 1924). This operetta was all original – from the music, bright and colorful, and up to an unusual musical comedy detective story. But the last half-century, this great (previously always called that way) operetta was completely forgotten. Forgotten and beautiful romantic film “Rose Marie”, based on the operetta. The main roles are played by Hollywood star couple there 1930-40’s Jeanette MacDonald and Nelson Eddy. Becoming the “pioneers” of the genre of musical adventure comedy they co-starred in only eight music hits, but the impact of these films makes them cultural icons. Today, after more than 60 years after their last movie filmed together, they are still instantly recognizable and often copied. Whenever the TV show they want to show the romance of the era operetta necessarily performed one of the arias Jeanette (unfortunately, not in our country.)

While millions were convinced that MacDonald and Eddy were “made for each other,” a duet of the movies did not materialize. The crew called them “parrots, lovebirds,” but Hollywood tough laws did not allow them to marry. Studio boss Louis B. Mayer was against the marriage bond between Nelson and Jeanette, because I thought that the wedding between the audience ruin romantic dreams about each of the artists. But deep mutual chuvtva were. Served as a source of information older sister Jeanette – Blyusum Rocky [Blossom Rock]. She argued that the relationship between Eddie and MacDonald began in 1933 and lasted, with some interruptions to Jeanette’s death in 1965. Many letters and personal records Eddy was cited in the book “Lovers” Sharon Rich. They came to the movies in different ways from different walks of life. Prior to his Hollywood career Nelson sang in opera and performed major classical works that are in the world and American culture classics: works by composers such as Richard Strauss, Alban Berg, and Ottorino Respighi. Jeanette, on the other hand, began as a chorine, who sang and danced in Broadway musicals. A few years later their paths parted forever. After the death of Jeanette in 1965 Eddie strongly handed. January 31, 1960 in “The Night radio show on the issue of relations with Jeanette, he replied simply:” I love her. ” According to his accompanist Bob Hunter, Eddie MacDonald sang a special song each of his evening performance.

Baritone Theodore Uppman said that in 1947 he saw a couple together and the conversation that evening touched on that Jeanette was pregnant from Eddie, but he can not get a divorce. Nelson was also married to a mentally unstable woman, Ann Franklin, who blackmailed him into marriage, threatened to disfigure and Jeanette promised to make a scandal in the press, if Nelson with her divorce.

Ironically Janet MacDonald eventually married Nelson, but it was not Eddie. That’s such a sad story!

Eddie Nelson wrote a biographical screenplay about Chaliapin, in which he would play a leading role, but the film never entered production.

Jeanette Anna MacDonald was born June 18, 1903 in Philadelphia, and was the youngest of three daughters of Daniel and Anna Wright MacDonald. The father was a businessman in Philadelphia, and his mother – a housewife. All three daughters MacDonald studied singing and dancing lessons. And all three girls gave their hearts to the world of art. (The older sister, Elsie (Bernard J. Scheiter) was a pianist, and eventually opened her own school of dance and music. Middle sister, Blossum, toured in vaudeville under the name of “Rock and Blossum” with her husband, Warren Rock. At 30 -s, she starred in a number of supporting roles in several films. later she appeared on TV as a Blossum Rock (for example: the role of the grandmother in “The Addams Family”). “My mother and father were wonderful” – says Jeanette later – “They are always helped and never stood in my way. ”

***
Already back in 1993 on Valentine’s Day PBS stations across the country (USA) passed hour premiere, specifically titled “Nelson and Jeanette: America’s Singing Sweethearts,” producer Elaine Goldstein. The program represents the former MGM star Jane Powell. The “Washington Post” critic Tom Sheles called the program “a nice and sparkling,” and added that “even cynics should be able to see how to make communication so attractive.”

This celebrity couple has affected millions of hearts, inspired countless young people to follow a musical career and made classical music, met her many who may have never heard of or an interest in it.

Click on the photo above to visit the blog.