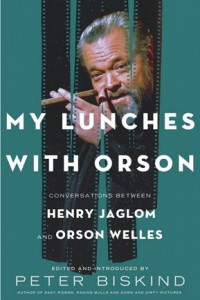 The following is of interest to Jeanette MacDonald and Nelson Eddy fans.

In the book Sweethearts, we learn that Jeanette first backed out of divorcing her husband, Gene Raymond, after serious threats were made against Nelson Eddy by the infamous Louie B. Mayer.

Some have questioned, did Mayer really have that power to frighten her so?

From the newly-released book, My Lunches With Orson, edited by Peter Biskind, here is Orson Welles’ take on the MGM studio boss:

HJ [Henry Jaglom]: Did anyone else offer you movies besides [Sam] Goldwyn?

OW [Orson Welles]: (Louis B.) Mayer offered me his studio! He was madly in love with me, because I wouldn’t have anything to do with him, you know? Twice he brought me over – spent all day wooing me. He called me “Orse.” Whenever he sent for me, he burst into tears, and once he fainted. To get his way. It was fake, absolutely fake. The deal was, I’d have the studio [as a producer] but I’d have to stop acting, directing, and writing – making pictures.

HJ: Why wouldn’t you have anything to do with him?

OW: Because he was the worst of them all. The rest of them were just what they were. The thing about Harry Cohn was: he looked like such a villainous Hollywood producer, there was nothing he could do that would surprise you. But L.B. was worse than Harry Cohn. He was self-righteous, smarmy, waving the American flag, doing deals with the Purple Gang in Detroit –

HJ: The Purple Gang in Detroit?

OW: Before the unions, it was all Mafia. But no one called it the Mafia. Just said “the mob.” And, mainly, the Purple Gang. They controlled all the blue-collar guys who projected the movies, pushed the dollies, swept the floors. They controlled the teamsters. They didn’t control directors or anything – didn’t need to. And when L.B. needed extra money, he got it from the Purple Gang. When he wanted strong-arm work, he’d call the Purple Gang, who’d send their tough guys into gown.

OW: Beat up. I wouldn’t put it past him to have people killed. He liked to think of himself as a founding father and capo [chief] of the Mafia.