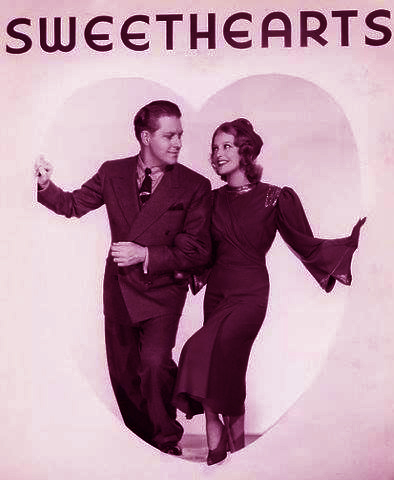 And what a gift for you… I’m glad this is a secret no longer. At last you can watch a short clip of them on TV together. The film reel can was labeled that this was the 1957 Patti Page TV show, The Big Record.  However, the actual clip is from the previous year on The Lux Video Theater with Gordon MacRae.

If you have read Sweethearts you understand what Jeanette and Nelson were like in public settings together where he got to “show her off.” Particularly in the 1940s when certain fans attended every radio show and scrutinized carefully every movement and catching of breath, every glance, every touch, Nelson’s attempts to kiss her in front of the fans. This tenderness and familiarity was obvious elsewhere, at parties or social engagements, when Nelson was giving a concert and pulled Jeanette on-stage with him, them just walking down the street together, or sneaking a kiss and embrace in a restaurant parking lot. Many eyewitness accounts are detailed in the book; now you have a chance to see for yourself what they were talking about.

And here I want to publicly give a HUGE shout out to Katie, Angela, Mary Lynn and Lynda who pulled off an amazing feat in obtaining this and whatever was left of the old Jeanette fan club holdings, including many personal items and record-keeping and files that had belonged to Jeanette. One has to wonder why Gene Raymond didn’t trash it all but shipped it instead to her fan club, presumably understanding that Clara Rhoades would bury any sensitive information forever that might have been overlooked. And he had already gone through it for “obvious” stuff that needed to be destroyed and done two rounds of purging from the storage units. I was told this by Clara Rhoades herself, when she asked my friend Diane Goodrich to secretly make copies of the 16 mm films Gene loaned her each year for their annual banquets. Gene was so ornery, Clara said, that she wanted back-ups in case Gene decided at the last minute not to let her screen Jeanette’s copies of her own films or other footage. And in the years I knew her, Clara particularly complained about this TV show which Gene held back despite her repeated requests to him to be allowed to show it. This was the case at least through 1977; after Mac/Eddy was founded Gene apparently had a change of heart about these TV shows because we were told by those still attending the Jeanette club meetings that the footage was screened at later events…but not frequently. Now having watched this Lux footage, it’s understandable why Gene held back with it and why Clara did not screen it very often. Just as with This is Your Life, you’d have to be totally oblivious not to see the electric current between them.

When these Jeanette auctions began, I saw quickly that there was much invaluable information to be had. We made a coordinated effort to obtain certain items since buying it all outright at the start seemed an impossible task. Some auction items looked innocent enough but stood out to me as necessary to win. This went on for many, many stressful months and was generally overseen for our group by Maria Escano. But many others helped safe-keep the collection and I am grateful to one and all who bid on and won auctions for our cause. There was only one item I learned of that I regret slipped past us, an outtake from Jeanette’s proposed autobiography in which she ‘fessed up to one failed pregnancy. But we have more than enough documentation about that and in the home stretch, Katie Gardner boldly pulled off a coup to seal the deal. Kudos to her for the sheer guts it took to make this happen! We can all breathe a collective sigh of relief that the footage (and a myriad of other items) is safe with those who will share it with the world rather than hide it.

I trust you appreciate the irony as once again, what others sought to cover up has come full circle and right back into the public eye where it belongs. Not hidden as though it’s something to be ashamed of, or to lie about. Once again it’s Nelson and Jeanette speaking from the grave, as it were. And those certain individuals who did loudly protest too much have had their legacy finally put into proper perspective. Yes, they were the keepers of the Jeanette-Gene, Nelson-Ann flame but maybe somewhere in the spiritual universe, even they  – like criminals who willingly unburden by finally confessing their sins – are glad the charade is over. After all, they hoarded a house full of possessions so that in the end, the rest of the collection came into the hands of those who will properly care for it.

Katie posted the video and wrote her observations at this link. No reason to add more commentary; her analysis is spot on. They say a picture is worth a thousand words, how many words then is a video worth, pray tell? Enjoy… you will want to watch it a few times… and bring kleenex!