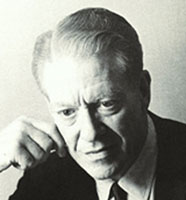 The death of Jeanette MacDonald on January 14, 1965 at age 61 shocked and stunned fans worldwide who had not realized how very ill she was during her last years. But none was more stunned than Nelson Eddy, who had spoken to her just days earlier and assumed her silence the last few days was just because she was recuperating and getting her strength back. Nothing could be further from the truth…as he was to soon learn. (And that is a horror story on its own…but not the topic of this article.)

Nelson’s initial shock and disbelief was very clear (see photo above) as the first TV reporter interviewed him.  Nelson had checked into his hotel in Anaheim, preparing for his opening the following evening of his nightclub act. Here is the audio tape of that very first interview…Nelson gasping as he spoke in spurts…the interviewer kept pushing him beyond what he could tell and deal with for (as he so bitterly termed) “public consumption.” The “interview” ended prematurely due to his breaking down and crying.

For many years, this was the only available interview footage but just last week, our fellow sleuths Katie and Angela were able to obtain a TV interview done with Nelson Eddy the next day. Note that he had not slept all night and was talking to reporters until 5 am. I find it telling that this poor man found more comfort in Anaheim with members of the press to talk to all night than say, for example, rushing back to Brentwood and finding solace with “the woman I’m married to” – ie, Ann Eddy.  She was nowhere in sight to comfort her spouse who was grieving the loss of his great love.

In the telling and re-telling of many of the same stories during that long hellish night, Nelson got a little more careful about what he revealed. Below is the video clip from January 15, the day after Jeanette’s death, not seen since it first aired. This interview is less than 24 hours after the first one where he can barely speak. There are many things to notice in this video. For me, the most striking was the change in his expression and entire countenance when he tells the story of how Jeanette was in “the dog house” after angering director Woody Van Dyke for showing up late on set. He totally relates to her and her viewpoint, he justifies why what she did was adorable and correct, and he sounds like a happy little kid telling it…his breathing changes, his face flushes slightly, there is momentary joy and pride in his voice behind the evident shell-shocked grief. “She’s a smart – she was always a smart girl,” he says…and those who have read the book Sweethearts know that he liked to call her “my girl.”  “I mean, who wouldn’t want to look at the rushes?” he defends her.

I have heard several people say that Nelson gave himself away when he would discuss Jeanette – in person they noticed the very same thing, the change in his voice and breathing and beaming joy and flushed face…this was a man whose emotions were fairly transparent. Well, take a close look at the video and see whether you don’t notice the same thing when he tells that story. (Look at his smile and the private moment he seems to have as he chuckles over her and defends her for being late to set  in the first place.) 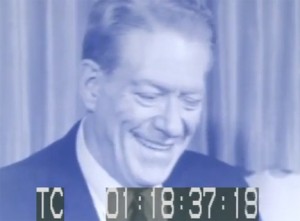 Which, by the way, he mistakenly attributes to the film “Sweethearts” when it was actually their first movie “Naughty Marietta.” This should indicate how traumatized he was – he was a very meticulous, precise man who would never make such a blunder in the retelling of an anecdote if he wasn’t sleep-deprived and emotionally drained.

He also tells an incorrect story of when he first met Jeanette although he is honest in saying it was on personal terms rather than for the start of “Naughty Marietta.” He very well may have gone to a party at Jeanette’s home for a public function but there is ample documentation to show that by November 1933 they had already had their first disastrous date, she was attending his local concerts and he had already- to her amazement –  asked her to marry him.

From Nelson’s first interviews, where he admits having talked to Jeanette “about a week before” her death about “getting together for dinner,” he has now whipped that story into shape and for this interview, it’s all about Nelson and Ann, Jeanette and Gene  talking about having dinner together as a happy foursome. Anyone who has read my book Sweethearts knows what an absolute crock of nonsense that was, particularly at this point of the story!

Another telling part of this interview is when he is asked if their relationship changed when he became as big a movie star as she was due to “Naughty Marietta.” As my friend Bern pointed out, there is a momentary glimmer of panic and wariness and he tells the interviewer he doesn’t understand the question. His breathing gets tense and a bit labored…watch for that. (See photo below.) 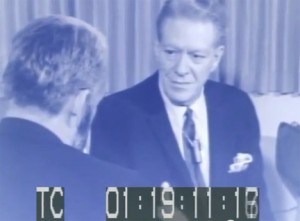 Nelson’s video interview is below.

Thanks to Katie and Angela for uncovering this unhappy but important gem and making it available for viewing. Please note the viewing rights of this video at the link to Katie’s original posting of it here (with more research and insights pertaining to the events of that awful week) and she also found a tragic statement given by Nelson to the  Boston Sunday Herald dated Jan 17, 1965.

“I shall be at the funeral on Monday. It will be the most miserable day of my life.” – Nelson Eddy