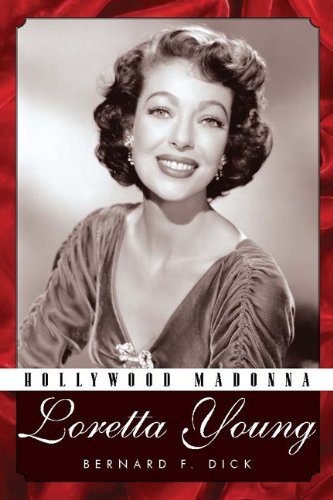 Missed this book when it first came out, but interesting to see the author’s comments regarding Jeanette MacDonald’s husband Gene Raymond, who co-starred with Loretta Young in 1933’s Zoo in Budapest.

In November, 1932, Jesse Lasky announced his intention to become an independent producer at the Fox Film Corporation, with Zoo in Budapest and Berkeley Square as his first productions….[Gene] Raymond gave a bravura performance as Zanni, and animal trainer….For those who only know Raymond as Jeanette MacDonald’s husband, his Zanni is a revelation. It is a strikingly athletic performance, requiring Raymond to jump over partitions, and in the terrifying climax, to hop on the back of an elephant with a young boy he has rescued. He must then grab on to a rope to hoist the boy and himself to safety…Loretta had relatively little to do in the film. The real stars were Raymond and director Rowland V. Lee, who kept a fragile script form splintering. Raymond fancied himself the successor to Douglas Fairbanks; however, it was Errol Flynn and then Douglas Fairbanks, Jr., who buckled the swash and wielded a mean rapier. Still, Raymond’s performance was admirable. He did not need a double; like Burt Lancaster, he did his own climbing and swinging, in addition to exuding the kind of machismo that won over audiences. Raymond was probably one of the leading men Loretta developed a crush on, not knowing at the time that he was bisexual, more homosexually than heterosexually inclined. In fact, when he married Jeanette MacDonald in 1937, she was still in love with Nelson Eddy, her first and only love. Raymond’s lover at the time was Mary Pickford’s husband, Buddy Rogers….But at the time Zoo in Budapest was filmed, Raymond had not met MacDonald, and only a few kindred spirits knew his sexual preferences. As for Loretta, the crush ended when the shoot was over, and then it was on to another leading man and another crush.

The biography is available both in hardback and Kindle edition. You can order it/download it from Amazon.com here.

Thanks to Margo Slaughter for alerting me to this!