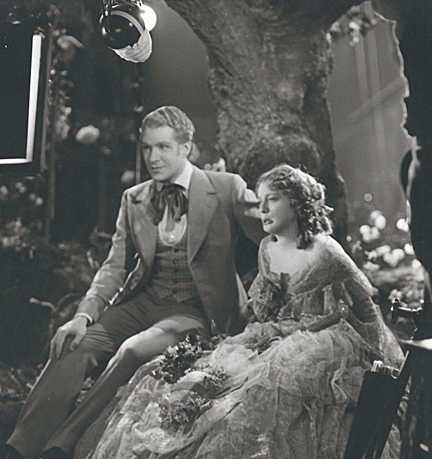 The above candid shot from Maytime certainly captures Jeanette at an off-moment but still the photo is fascinating as it shows the complexities of their relationship at that time. Jeanette was engaged to Gene; Nelson was miserable but here, just sitting and being close to her, his hand behind her, he is content; he is “at home”; she is still the center of his universe. Behind them is the famous tree that in December 1936 was the backdrop for a night of passion when both stayed late at the studio, confronted each other and Jeanette – forgetting all about her fiance Gene Raymond, threw herself at Nelson and demanded what they both craved. Nelson would still brag about her seduction of him years later; it’s detailed in Sweethearts. The blur between their onscreen characters and real life was at its height. But the aftermath was a few weeks of being “in lust” with each other while in-between they tried to plan a future together. She was willing to dump Gene and stop working such a grueling schedule so she could be the wife and mother Nelson envisioned for his family. But she didn’t feel it right for him to insist she give up her career altogether and it was on this point that stubborn Nelson lost her again.  If you have read the book you know they lived to regret their decisions. But such was the drama of their lives.

It is easy to fix blame on one or the other and at different points of their story, I myself have been angered and tempted to reach back into history, grab each culprit by the scruff of the neck and shake some sense into them. Hindsight is useful to being objective as a biographer but to those who love one or the other or both, it can also be very painful.

This is where compassion is needed. Because one can be angry with Jeanette since she made Nelson’s life hell for four-plus years when all the poor guy wanted from Day 1 was to marry her.  All the “good reasons,” her career, her mother, Mayer’s threats, Nelson’s quirks and human failings…in the end it all was meaningless to her after January 19, 1939.

And her rejection scarred Nelson so that he was emotionally needy and to some degree unstable in trying to work through it and forgive and continue on with the swings of their life and love.

As for Jeanette, she talks in her autobiography about Gene’s lousy childhood and how it scarred him, and how she had to deal with the effects of that…but of course, in that book much of what she says in a heartfelt manner could also (or instead) be talking about Nelson. Even in not being fully honest about Gene, we still learn a lot about how compassionate was her basic nature.

When I think of Jeanette in her last, failing years, I see a similarity to the recent Carrie Fisher-Debbie Reynolds tragedy. The documentary “Bright Lights,” released right after their deaths (one day apart), shows a mother-daughter relationship of very deep, obsessive love despite sometimes annoyance, hate and even estrangement. There are comparisons to the Jeanette-Nelson love relationship in the give and take. Debbie Reynolds was an over-possessive mother in that she wanted to oversee and orchestrate everything; Nelson could be over-possessive and smothering with Jeanette as well. Despite both their feisty personalities, Reynolds and Fisher were never able to cut the umbilical cord. This is how it was told me to me about Jeanette and Nelson; no matter what they were never able to cut the “umbilical cord”. 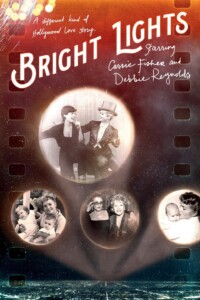 Looking at the last footage of Reynolds in that heartbreaking documentary, you see her very frail and ill, with barely enough strength to stand up and walk, her mind not as razor sharp although the fast wit is still there. She is more like a “normal” person in failing health, but it hurts to see her so because after all, she is Debbie Reynolds! She is not a mere “mortal” but an MGM star and damn it, she’s going to pull herself together and put on her makeup and gown, walk onto the stage and accept a SAG Lifetime Achievement Award! Manage to say a few words then walk off that stage with all the dignity, grace, energy and charm of a movie queen. It’s ingrained in her even as it was for Jeanette in trying to pull herself together for Nelson in those last years so he wouldn’t see her as old and sick (as she saw herself). Anyway, I highly recommend watching “Bright Lights”; it’s free to watch if you have access to HBO.

One must also have compassion in understanding Nelson particularly in the last years. While he initially thought Jeanette would outlive him (which is why he began writing up for her a journal of intimate details of their love life in the mid 1940s), by the end of the 1950s it was very apparent that would not be the case. He had to steel himself for that inevitability and also learn how to survive afterwards.

To better understand his challenges, in our upcoming two magazines (out soon, stay tuned!) we will feature some family history documentation possibly not familiar to you that helps us understand the background of Nelson’s emotional strengths and frailties. Such as the document below: 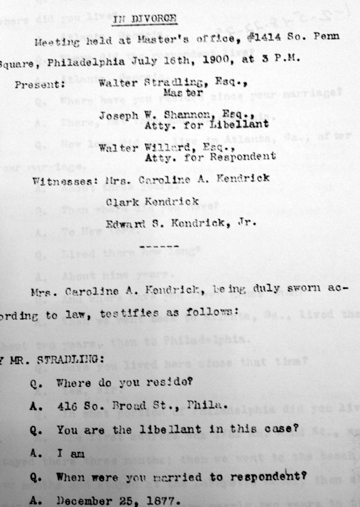 Knowledge is understanding. And when you study at this young man below, you can observe someone for whom life has already not been easy. And who would be inclined to have trust issues, family issues, a need for stability and constant proof of devotion. So…keep in mind that Nelson and Jeanette left an amazing legacy of art and love. I recommend that – hard as it may be at times – to keep a viewpoint of compassion for what these people went through to bring us these treasures. 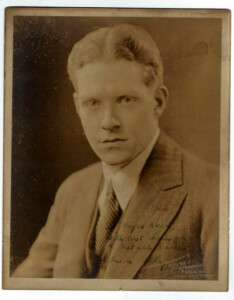 Thanks to Maria Escano for the photo of young Nelson.

« New Year’s Sale and News! » January 13: Nelson’s song to Jeanette: My Wonder One