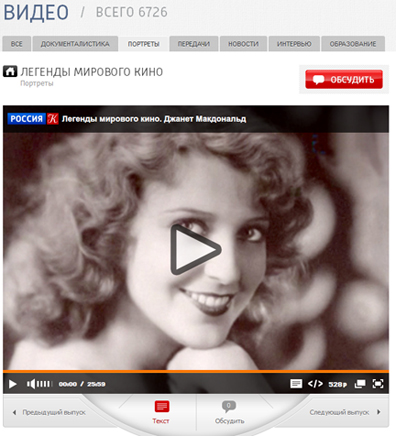 Here is a link to watch video from Russian TV. The show is called Legends of World Cinema and this episode is dedicated Jeanette MacDonald. It aired on November 25, 2012.

LINK TO WATCH THE VIDEO

I would like to thank Di Taylor for bringing this video to my attention and Inga Gruzdeva  for providing the link and translating the narrative part of the show:

Here starts a walk in the Hollywood jungle, where even butterflies can be iron. Today, you will see a brilliant Jeanette MacDonald Magnificent. In 1930 years she appeared on the California coast, and for a long time was kept in Luis Mayer collection. He deprived her freedom, but the exchange of the independence for the popularity was quite normal for Hollywood.   Three daughters of Philadelphia businessman Daniel MacDonald were engaged in singing and dances. When Jeanette has growing up she went to   Broadway. She has begun with a chorus line. Before to become the butterfly, she was a caterpillar and did everything to achieve a success. Finally she had luck; the leading actress has fallen off from a stairs and has broken a leg. Leading actresses, as a rule, do not fall; usually they are helped by the best girlfriends. No, no, I do not insist on anything. Certainly to Ms. MacDonald it has no attitude. Public has accepted her excellently, she have paid a lot of money. Her name was shone in a big letters on a building.  She stood a long time and looked at her name; she knew she would not rest on its laurels.

Soon her photos were seen by director Ernst Lubitsch. He said: ‘ If this girl is still able to sing, I shall make her a star of musicals and if she is not able to sing all the same I shall make her a star”. Lubitsch treated his actors as the dolls. All pitied the poor girl that she would have to work with the person who has such awful character. On the set Lubitsch was expected with an unpleasant surprise. The girl really has a character. Once he cut her name and called her “Mac,” in response, she called him “Lu”. All waited for a scandal, but Lubitsch said nothing.  And since then, he always called Jeanette miss MacDonald. “Miss MacDonald, shut up, Miss McDonald, what a crashing bore you are!” Lubitsch was supported in all things by French chansonnier Morris Chevalier. Jeanette rejected him, and he revenged her for it. She was going crazy only at one thought that she and Chevalier might be together. She hoped that they will not be removed together any more, but she was mistaken very much. They starred in 4 Lubitsch films.

Jeanette’s musical numbers were mini masterpieces. Critics wrote that her singing and gestures are much more French and seductive than allow her Philadelphia upbringing. For a star her daily routine was amazing and more resembled the monastic charter. She got up at 6:00 am, was engaged with a ballet bar, then a light breakfast – warm milk and fruit. At 7:00 am she was already in a make-up room and at 8:00 am on a set. At 10:00 pm she went to bed. She kept men at arm’s length, being afraid to harm her career. Men in revenge have nicknamed her the Iron Butterfly and hid the scars left by her pointed wings.

When Jeanette was invited to appear in the film Naughty Marietta she said that she will choose a partner by herself – young, tall, blonde with blue eyes, who knows how to read music. She was told that there was such an actor – height 182 cm, 33 years old, blond with blue eyes, an opera singer, full-bodied. She agreed to this proposal.

Soon director Woody Van Dyke began to lose his patience. He said: “I’ve handled Indians, African natives, South Sea Islanders, rhinos, pigmies and Eskimos and made them act – but not Nelson Eddy!” Jeanette and Woody have made tremendous efforts to help Nelson. “Naughty Marietta” made a mad success. The press has congratulated readers with a new duet – Jeanette MacDonald and Nelson Eddy.

Van Dyke did not doubt of Jeanette qualifications, but Nelson still caused doubts. When began filming Rose Marie, he advised Janette to pay attention to Allan Jones – he is handsome, perfectly sings and moves like a leopard. But she stopped up her ears, she can imagine as sergeant Bruce nobody but Nelson.

The film was shot on location at Lake Tahoe. Jeanette and Nelson lived in a small house surrounded by relict pines. Situation was conducive to romance. And once Nelson has presented a ring to Jeannette.  She was sure that he would marry her. In the books, if a man gives a ring to a girl, he will marry her. But it is only in books.

Their romance Mayer took as a personal insult and demanded put an end to that. “There is only one image of Jeanette – an innocent angel, but an angel cannot have children”.  And she continued to live with her mother and three dwarf poodles. Rose Marie enriched the MGM with a few million dollars. Critics wrote: This is something completely unique in the movies. When they sing, you forget about everything, even about the authors of an operetta and film. ”

Collection of movie stars gathered Mayer, testified that he was very authoritarian and had no sense of proportion. There is a dangerous mix. “Miss MacDonald, I need your advice. Yes, at 2:30 AM, yes, in my office. Well, why should we quarrel? One head of the studio is ready to give up the family and join his lot with one of his actresses. Well, what do you say about this? Just do not say that marriages made in heaven. This idea is old. “- “It was a dream, it was a dream, a bad dream,” – Jeanette convinced herself .” “Miss MacDonald? Hello? Silence is a sign of the answer” yes?”

It is a fact that the dream with Louis Mayer could be only a nightmare. Jeanette was looking for protection in Nelson, invited him to her place and was surprised that her very loyal mother did not hide her contempt for him. This is a monstrous misunderstanding. Some day they will become friends. Nelson is a great guy, he just needs time. Jeanette did not want to press him and just waited.

Jeanette wanted to film with dramatic actors Clark Gable and Spencer Tracy as co-stars. Mayer could let her pleasure. The film was called San Francisco. Viewers in whole approved the film but it seemed to them, that there is something illogical. Clark Gable and Jeanette MacDonald?  Public had hoped that suddenly Nelson appeared from somewhere and he will take away Jeanette from Clark Gable and they will sing a song against the background of a decline. That would be correct.

Oh, but what happens? Is Miss MacDonald married? Her fiancé was actor Gene Raymond, by the way blue-eyed blonde too. And this time, Mayer did not mind, he personally organized the ceremony. He said: “The whole world will talk about this wedding.” The wedding ceremony was attended by many celebrities. “But you were not there? Well, do not worry, do not cry. I know a guy who would sell his soul to escape from this pompous event. His name is Nelson Eddy. You are familiar with him, aren’t you? Certainly he is our old friend. Mayer forcibly dragged him shouting, “Your contract states that you have to participate in promotions. Believe that this is one of them!”

Nelson forced himself to congratulate the newlyweds and sang I Love You Truly, and then finally wilted. Fans believed that the wedding was just a publicity stunt and actually their idols Jeanette and Nelson were not separated. It followed that the couple has not yet exhausted its commercial potential. But Jeanette thought otherwise. She asked Mayer to give her another partner, but he said no, “you will be working with those with whom the audience wants to see you.” Mayer openly was enjoyed the situation. “Marriages are made in heaven,” – he reminded her on occasion. He decided to pay her back, and with interest.

During the filming of “New Moon,” they were so engrossed in each other that once again decided to marry and it was unclear why they told about it to Mayer. He decided that the actors are not in themselves, so the punishment was not too severe.

Jeanette was already 36 years old, but she had to play the young girls. Critics suggested her to take a break, and mentally she agreed with them, but she had a contract. Nelson too was not become younger. Their last collaboration was the musical “I Married an Angel.” Everybody and even Mayer himself named this film “Mayer’s Money, Thrown out on a Wind”, therefore Mayer has cut off a cord forced his puppets to dance. Initially, Jeanette did not notice right away, she was very busy: concerts, recordings, radio and television shows. And then it turned out that she was necessary to nobody. Time has not been kind to Nelson too. When Jeanette met him on television, she burst into tears, so changed was her prince charming.

Jeanette tried to give serious attention to the music; she took music lessons at the famous opera singer Lotte Lehmann.  At first she was skeptical about her pupil, but then said that Jeanette could be a real opera singer, if she began earlier.  But her note A can be praised. Yes, if she have the time and health. It began to fail more often.

Butterflies do not live long, and the iron butterflies are not exception. But death does not prevent Jeanette MacDonald to win new fans around the world. I believe you also will refill their ranks, endlessly listen to her intonation, scrutinize her face, or a pattern on her dress.