Jeanette’s jewelry from “New Moon” and “The Firefly” auction tomorrow! 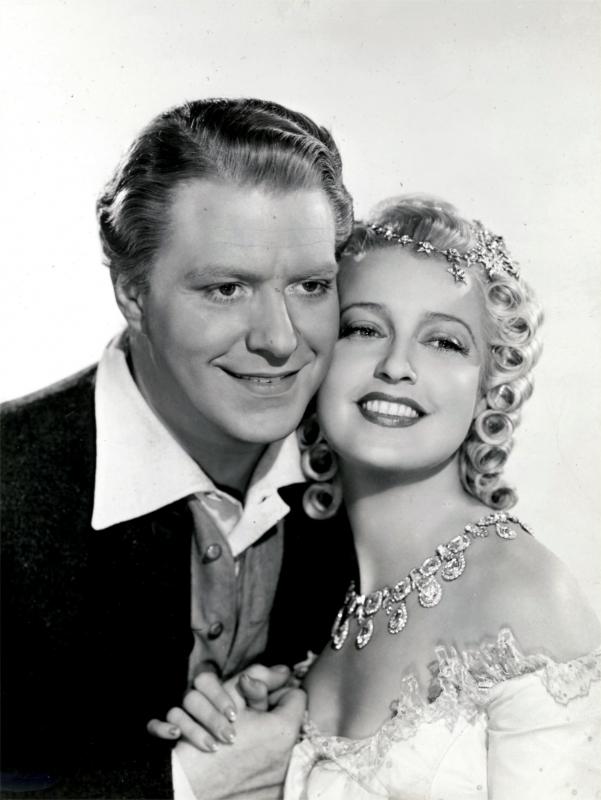 Some amazing Jeanette MacDonald jewelry worn in her films are up for auction! She wore the first one in New Moon! (And the headdress Jeanette wears above can be down further down this page.) 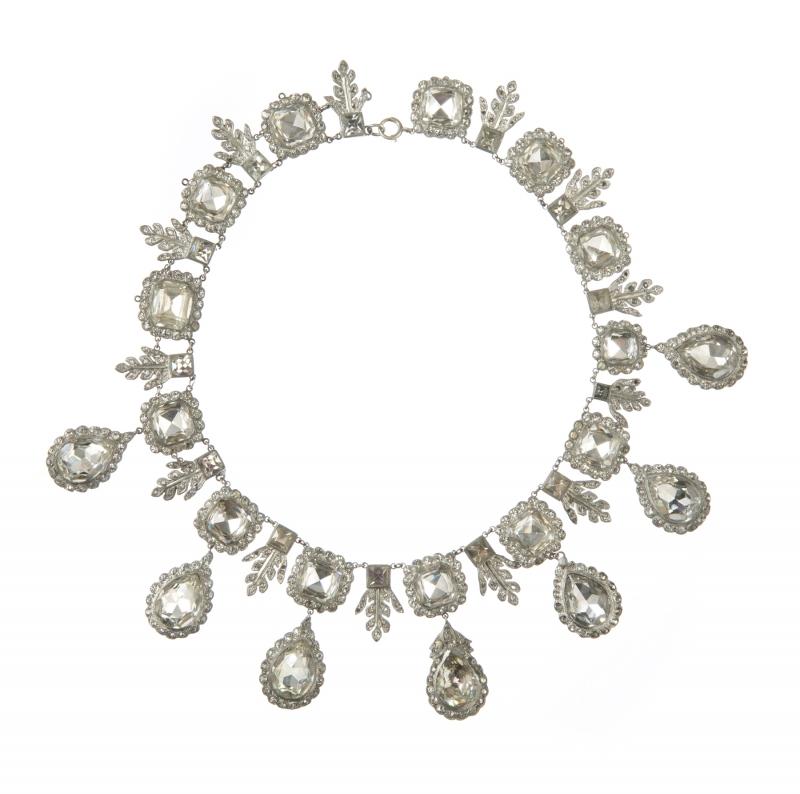 Description of the necklace above:

A simulated diamond evening necklace with seven pear-shaped drops. The necklace is one of the most versatile and frequently used pieces in the Joseff collection. Worn by Norma Shearer in Marie Antoinette (MGM, 1938); Jeanette MacDonald in New Moon (MGM, 1940); worn by Ruth Warrick with an extender to create a wider fit in The Corsican Brothers (Edward Small Productions, 1941); Norma Drury in That Hamilton Woman (Alexander Korda Films, 1941); Betty Grable in Coney Island (20th Century, 1943); Heather Thatcher in Gaslight (MGM, 1944); Tallulah Bankhead in A Royal Scandal (20th Century, 1945); Anita Louise in The Fighting Guardsman (Columbia, 1946); Barbara Britton in The Return of Monte Cristo (Edward Small Productions, 1946), modified with large central stone drop; and Lucille Ball in a studio publicity portrait. Accompanied by a vintage German lobby card showing Louise, vintage sheet music for “Take It from Here” featuring an image of Grable, a vintage photograph of Bankhead wearing the necklace, and DVD copies of Gaslight and That Hamilton Woman. An online link to an image of Warrick wearing the necklace is available upon request. Length, 15 1/2 inches

The next one was also worn in New Moon: 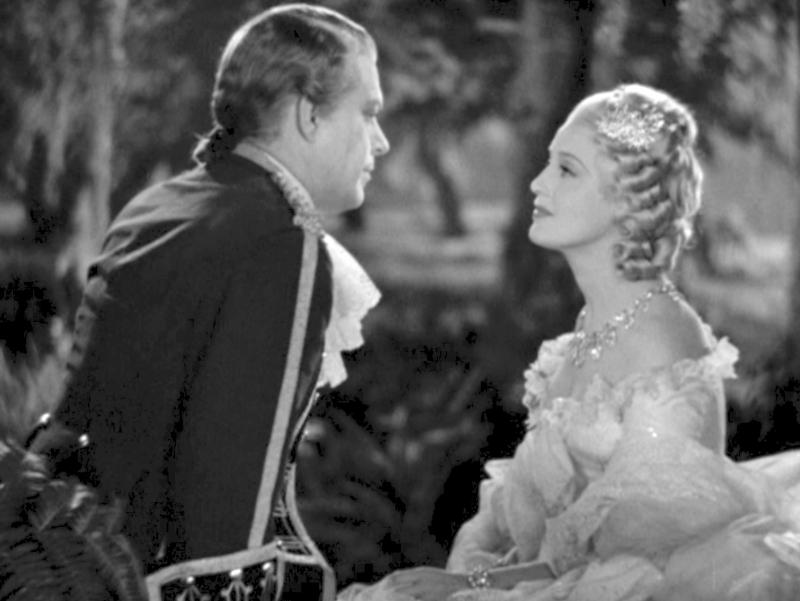 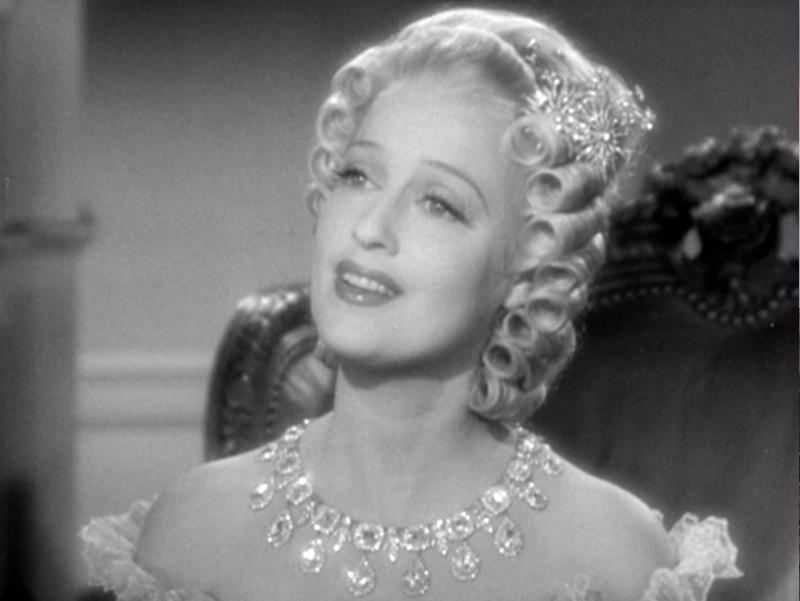 A celestial hair ornament with two radiating suns with sprays of stars, all set with simulated diamonds.  Worn by Jeanette MacDonald in New Moon (MGM,1940), and Mae West in The Heat’s On (Columbia,1943). Accompanied by a vintage photograph of West wearing the piece, and a DVD copy of New Moon. Length, 5 inches 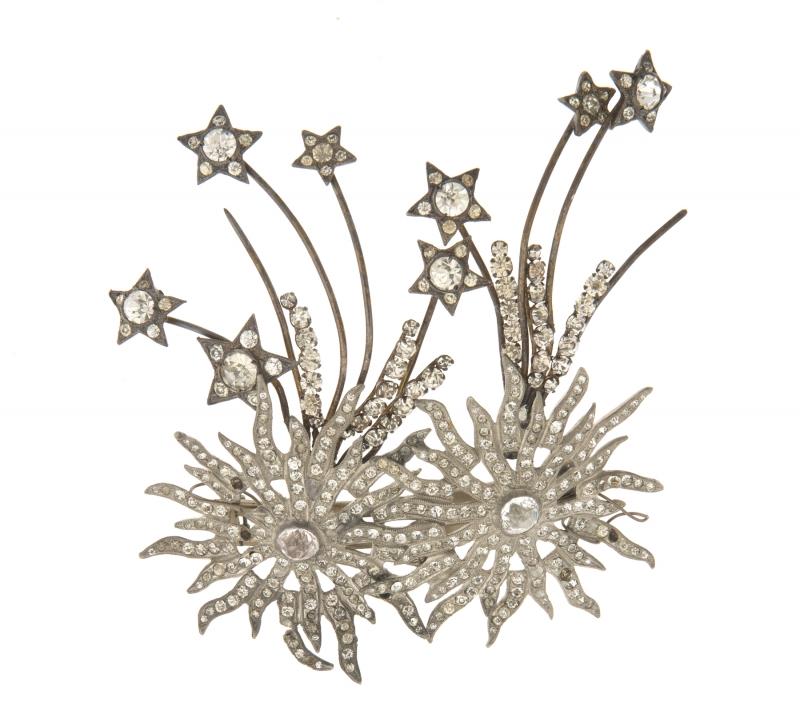 A bracelet that Jeanette wore in New Moon: 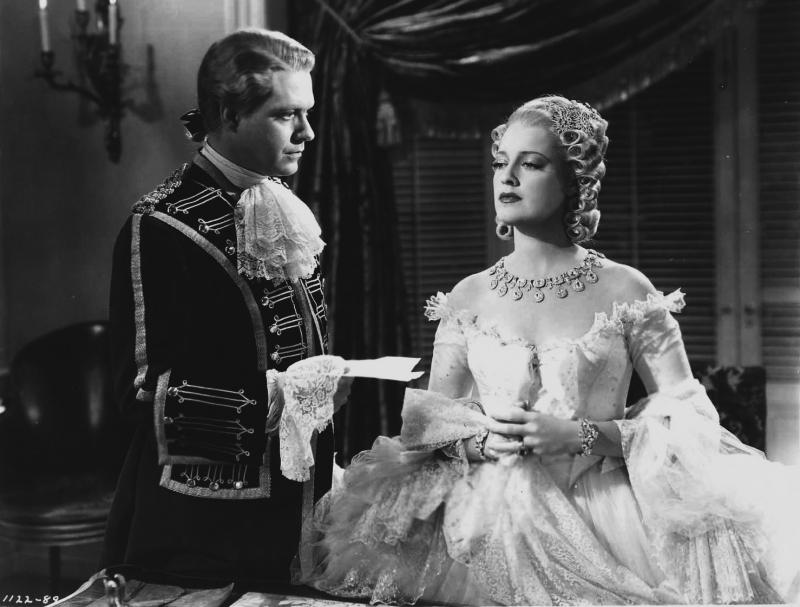 A simulated diamond and pearl bracelet in floret pattern, box clasp closure. Worn by Jeanette MacDonald in New Moon (MGM, 1940). Accompanied by a DVD copy of the film. Length, 6 inches 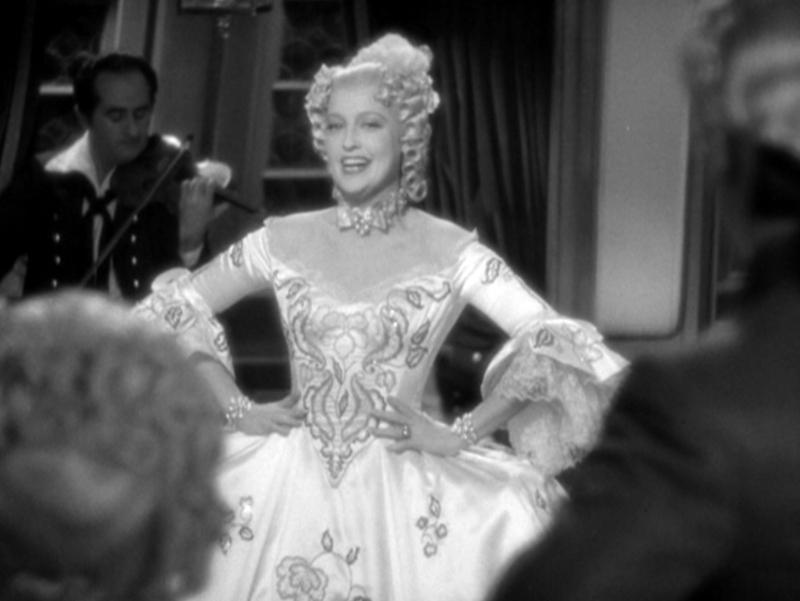 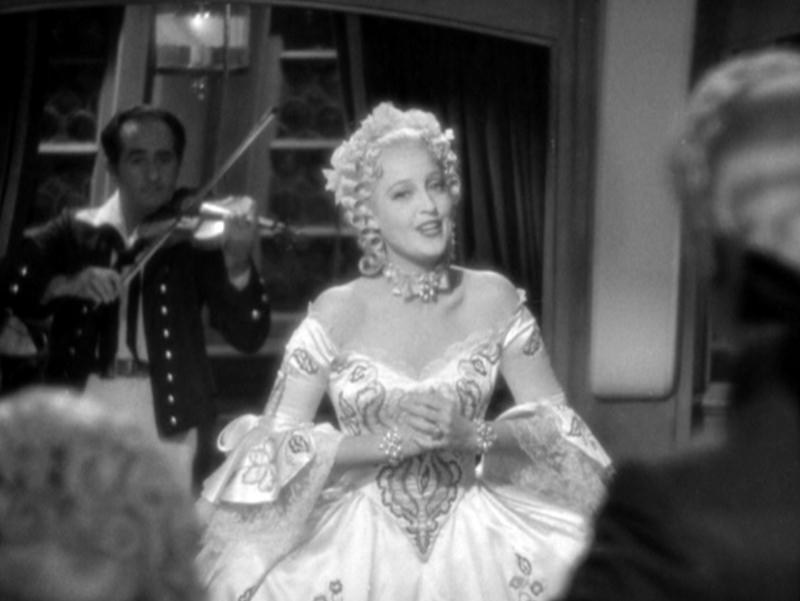 The next item is a necklace worn by Jeanette in New Moon as a headdress; see the picture at the very top of this page for reference and the actual necklace below:

Next item is another bracelet from New Moon; check out the picture above with Nelson to see it in context…and the actual bracelet below.

And finally, a jewelry set worn by Jeanette in The Firefly: necklace, earrings and two bracelets as seen below.

The necklace and its details:

A single-to double-strand tiered, simulated diamond evening necklace with central floret featuring diamond drops; spring clasp closure. Signed “Joseff Hollywood.” Worn by Fay Wray in The Affairs of Cellini (20th Century, 1934); Jeanette MacDonald in The Firefly (MGM, 1937); Anita Louise in Marie Antoinette (MGM, 1938); Ann Sheridan in a studio publicity portrait used to promote Dodge City (Warner Bros., 1939); Hedy Lamarr in Her Highness and the Bellboy (MGM, 1945); Lucille Bremer in a studio publicity portrait used to promote Ziegfeld Follies (MGM, 1945) that appeared on the cover of Life magazine; June Haver in I Wonder Who’s Kissing Her Now (20th Century, 1947); Ava Gardner as a hair ornament in The Great Sinner (MGM, 1949); and Lana Turner in The Bad and the Beautiful (MGM, 1952). Accompanied by a lobby card showing Gardner wearing the necklace as a headpiece, a copy of the March 25, 1946, issue of Life magazine featuring Bremer wearing the necklace on the cover, a vintage photograph of Haver, and a DVD copy of The Great Sinner. An online link to an image of Lamarr wearing the necklace available upon request. Length, 13 1/2 inches

Below: a good shot of the earrings and bracelet from The Firefly:

A pair of clip-on gold-plated earrings, done using Joseff’s signature Russian plating technique, with simulated diamond florets and pear-shaped drops. Worn by Jeanette MacDonald in The Firefly (MGM, 1937); Ann Sheridan in a studio publicity portrait used to promote Dodge City (Warner Bros., 1939); Janis Paige in One Sunday Afternoon (Warner Bros., 1948); and Lana Turner in The Bad and the Beautiful (MGM, 1952). Accompanied by a DVD copy of The Bad and the Beautiful. Length, 2 1/8 inches.

A pair of bracelets: the first a hinged metal bracelet, the second with accordion chain. Both feature florets of simulated diamonds, done using Joseff’s signature Russian plating technique. One of the bracelets was worn by Fay Wray in The Affairs of Cellini (20th Century Fox, 1934) and Jeanette MacDonald in The Firefly (MGM, 1937); both were worn by Ginger Rogers in a studio publicity photograph to promote Magnificent Doll (Universal, 1946); Janis Paige in One Sunday Afternoon (Warner Bros., 1948); and Rosemary Lane in a studio publicity portrait. Accompanied by a vintage photograph of MacDonald wearing one of the bracelets. Circumference, 6 1/2 inches

Here is the link to all the auction items. Good luck to anyone who bids and if you win, please share with us some photos of these “in person.”